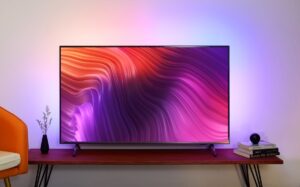 Philips today has announced that its new 8500 Series 4K TVs are now available in Malaysia. The new smart TVs are offered in three models of varying sizes, 50-inch, 55-inch, and 75-inch.

According to the company, all three models are equipped with 4K UHD LED panels that support Dolby Vision HDR, HDR10+, and HLG formats. The displays also feature variable refresh rates via HDMI 2.1 connectivity, a low latency setting (ALLM) that enables for higher response rates when gaming, and Philips’ Ambilight lighting system which gives the TVs a background glow that matches the on-screen action. On the audio side of things, the trio comes with 20W (2x 10W) full-range speakers with Dolby Atmos support and DTS Play-Fi wireless audio streaming capabilities.

Under the hood of all three Philips 8500 Series TVs is a four-core chipset, along with Android TV 10 operating system, 4GB of RAM and an internal storage capacity of 32GB. In terms of I/O connectivity, onboard each unit are a slew of ports which includes four HDMIs, two USB-As, an Ethernet-LAN port, a digital audio out, and a 3.5mm headphone jack. For wireless connectivity, all three models come with Wi-Fi and Bluetooth 5.0 support.