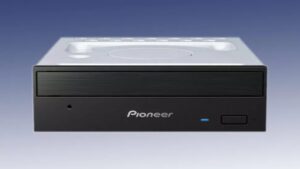 Outside of video game consoles, optical disc drives are going the way of the dodo. But that’s not stopping Pioneer from announcing a new Blu-ray drive, designated the BDR-213JBK.

The Pioneer BDR-213JBK does just about anything you could ever want an optical disc drive to do. To start, it is capable of reading and writing most CDs and DVDs in addition to Blu-rays. And it does the writing part pretty quickly too, from what the company claims. We’re looking at 16x speeds on single-layer 25GB Blu-rays, 14x on double-layer 50GB ones, and 8x on triple-layer 100GB discs. Writing on 4K UHD Blu-rays are rated at 6x speed too.

DVD and CD recording speeds are rated at 16x and 48x, respectively. For audio CDs, the Pioneer BDR-213JBK also has a feature the company calls Pure Read 3. This allows the drive to adjust its reading method if it runs into issues caused by scratches or dirt.

For most people, optical disc formats may as well be obsolete. But if you’re an enthusiast of, say music, chances are you’d still want a good one for ripping CDs. After all, not all streaming services cater to all sorts of listeners, and arguably the biggest one still doesn’t offer HiFi streaming. The product page doesn’t come with a price, but according to Tom’s Hardware, it’s the equivalent of US$150 (~RM629).