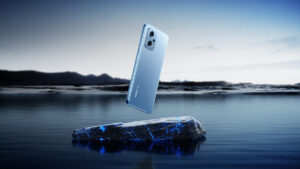 Launched together with the POCO F4 earlier this evening is another smartphone from the company, the POCO X4 GT. Unlike the former, the phone is equipped with a 5G-enabled MediaTek Dimensity 8100 chipset, and a slightly smaller display, but comes with a larger 5,080mAh battery.

Meanwhile, under the hood is the aforementioned Dimensity 8100 5nm chipset along with a Mali-G610 MC6 GPU, as well as 8GB of LPDDR5 RAM and up to 256GB of UFS 3.1 internal storage. Keeping its temperatures in check while performing heavy tasks or gaming is its built-in LiquidCool Technology 2.0 cooling system which features a large vapour chamber and seven layers of graphite. Besides that, the phone also comes with NFC, WiFi 6 and Bluetooth 5.3 connectivity.

Keeping the POCO X4 GT powered is a 5,080mAh battery, which features 67W fast charging support. According to the company, a 6 minute charge is capable of  topping up 25% of its battery, while a full charge would only take 46 minutes.

For imaging, found on the back of the phone is a triple camera setup which comprises a 64MP primary shooter, an 8MP ultra-wide, and a 2MP macro sensor. Situated within the punch-hole cutout on its display, on the other hand, is a 16MP front-facing camera for selfies and video conferencing.

The POCO X4 GT will be available in Malaysia slightly later than its sibling. Come 30 June 2022, the phone will be available for purchase exclusively via the brand’s official store on Lazada for a special discounted price of RM1399 for the 8GB + 128GB configuration and RM1499 for the 8GB + 256GB while stocks last. Outside of this promotion, the phone will retail at RM1499 and RM1599 respectively.