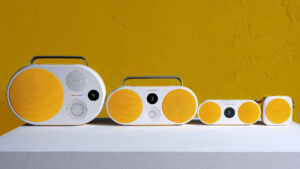 In a move that no one saw coming, Polaroid recently introduced a total of four new Bluetooth speakers – all of which are firsts for the company. For those who’ve been keeping up with everything photography, this announcement will undoubtedly come as a surprise – especially from a brand name, which for the longest of time, has been usually associated with mostly instant cameras.

The first from the bunch is the more compact Polaroid P1, which is intended for personal use or small gatherings. It has an onboard 45 mm driver, has a rated output of 10 watts, and comes with a water resistant rating of IPX 5. Besides that, it features a built-in 2,000 mAh battery that can last up to 10 hours of playtime, and can be fully charged within two hours of being plugged in. According to the company, users are able to pair two units together to achieve a stereo effect.

Next, we have the second device in the list, the Polaroid P2. As you’d probably already tell by the naming, the Polaroid speakers are larger in size (and feature better hardware) as the numbers climb up. This particular model comes with dual speakers, a circular display in the centre, a bigger 47 mm driver, and a 60 mm passive radiator to enhance lower frequencies. Powering the P2 is a 2,500 mAh battery which Polaroid claims is able to last up to 15 hours on a single charge.

Then we have the Polaroid P3, which in a way looks like a larger version of the previous model, but with a single 1-inch tweeter situated beneath its circular display. Internally, it features twin 2.5-inch audio drivers for its main speakers, and 74 mm passive radiators. Despite its larger size, the device comes with the same 2,500 mAh battery as the P2, which entails a total usage time of up to 15 hours.

Lastly, we have the high-end model, which is also the largest of the bunch. The Polaroid P4 comes with twin 1-inch drivers and a single 4-inch driver, along with a tweeter and a circular display in front. Powering it is a larger 4,000 mAh capacity but due to the device’s powerful audio output, the battery could only offer up to 15 hours of usage.

Besides the four speakers, the company also announced the Polaroid Music service, an experimental radio-like music discovery platform which will be accessible via the speakers’ companion app. Unlike other similar services such as Spotify and Deezer, the brand’s own platform is free with no advertisements, features music that is curated by humans, and packs a total of five “ever-evolving FM-like stations.”