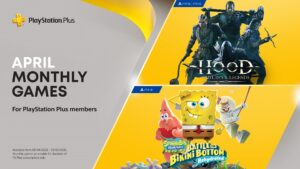 Malaysian PS Plus subscribers have had a good few months, sometimes getting more games than our international counterparts. Though it looks like for April things will unfortunately be swinging in the opposite direction. Next month, subscribers will only be getting two free games.

The first of the two games is Hood: Outlaws & Legends. This comes in both PS4 and PS5 versions, and was released in May 2021. It sees two teams of four players competing against each other to pull off the perfect heist. The second game for PS Plus subscribers is SpongeBob SquarePants: Battle for Bikini Bottom – Rehydrated, a licensed platformer based on the Nickelodeon series.

PlayStation Plus games for April:

As mentioned earlier, PS Plus subscribers in Asia won’t be getting the third game. The game in question is Slay the Spire, which is a roguelike deck-building game. For whatever reason, the game is not listed on the PlayStation Store for Asia. And it’s unfortunate that we’re not getting a replacement game in its place, the way we did last month.

Speaking of which, now’s as good a time as any to claim the free games for PS Plus subscribers for the month of March. These will be available until 4 April, after which the new list will take over.

The post PS Plus Subscribers Get Only Two Free Games In April 2022 appeared first on Lowyat.NET.