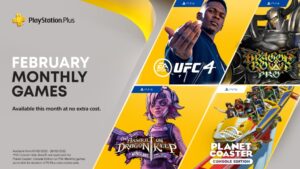 PlayStation Asia has announced the free games that PS Plus subscribers will be getting for the month of February. And like December, it looks like the Asia region is getting one more game than other regions. And it’s a pretty good one at that.

The complete list of free games for PS Plus subscribers next month is EA Sports UFC 4, Planet Coaster: Console Edition, Tiny Tina’s Assault on Dragon Keep: A Wonderlands One-shot Adventure, and Dragon’s Crown Pro. It’s worth noting that the second game is listed as the PS5 free game of the month, so if you were looking forward to it but don’t have the console, then you’re out of luck.

Your PlayStation Plus games for February are:

But on the flip side, the additional game being Dragon’s Crown Pro is quite the generous bonus for PS Plus subscribers in Asia. It’s not the blockbuster bonus the way Judgment was for December 2021, and it’s also a PS4 port of a pretty old PS3 and PS Vita game. But it’s still a game that can take up a lot of your time if you let it.

Attention, PlayStation Plus members: Your January lineup has arrived! Grab your games from today until 31/1/2022! pic.twitter.com/DqTWafntfd

At any rate, you can start getting these games the moment we enter February, and they will be available for the whole month. If you haven’t already claimed this month’s free games for PS Plus subscribers, it’s probably best to do so now.

The post PS Plus Subscribers In Asia Get Dragon’s Crown Pro In February appeared first on Lowyat.NET.