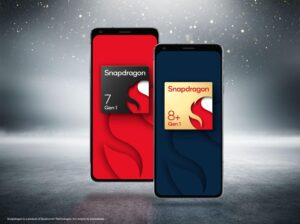 Qualcomm officially launched the follow-up to its current Snapdragon 8 Gen1 flagship: the Snapdragon 8+ Gen1 SoC. In addition to the new flagship, it also launched an all-new Snapdragon 7 Gen1 chipset series.

Starting with the 8+ Gen1 and as the follow-up act to its similarly named predecessor, the chipset comes with all of the fixtures and fittings one would expect from a high-end and premium-tier SoC, but clearly at more efficient and faster speeds. On paper, we’re looking at up to 10% faster speeds with almost 30% power reduction, and that’s just in gaming scenarios.

Specs-wise, the 8+ Gen1 retains Qualcomm’s chipset, dubbed the Artificial INtelligence Engine (AIE). It comprises Qualcomm’s Kryo octa-core CPU, Adreno GPU, and Hexagon Processor, which itself is made up of a multiple components that include a Fused AI Accelerator architecture, Vector eXtensions, Scalar Accelerator, and even a Tensor Accelerator.

Other details include Snapdragon’s X65 5G Modem, support for Wi-Fi 6E and Bluetooth 5.3, and of course, its suite of aptX codec support, plus the company’s Aqstic noise cancellation technology.

For imaging purposes, the 8+ Gen1’s Image Signal Processor (ISP) is capable of supporting a triple camera arrays with sensor sizes of up to 36MP, dual camera modules up to 64MP+36MP, and single sensor main arrays between 108MP and 200MP.

For display support, the 8+ Gen1 can support a maximum resolution of 4K60Hz or QHD+ at 144Hz, while the resolution via an output to an external display is limited to 4K60Hz. Oh, and it also supports HDR10+.

Moving on to the Snapdragon 7 Gen1, the new SoC series is also another follow-up, but to the 700 series SoC. Much like the 8+ Gen1, the series uses the Qualcomm AIE, featuring CPU cores with clockspeeds of up 2.4GHz, and a new Adreno GPU. It also comes with several Snapdragon Elite Gaming features, including the Adreno Frame Motion Engine, and the ability to support mobile displays at resolutions of QHD+.

Additionally, the 7 Gen1 SoC can also boast Qualcomm’s 7th generation AI Engine that includes Deep Learning Face Detection, even while wearing a mask. Performance-wise, Qualcomm says that this new intelligent feature should come with up to 30% improvement in facial recognition capabilities via AI.

Display-wise, the 7 Gen1 supports resolutions ranging from FHD+ at 144Hz and QHD+ at 60Hz.

At the time of writing, Qualcomm says that both its Snapdragon 8+ Gen1 and 7 Gen1 chipsets should start appearing in the devices of several partner brands during the second quarter of 2022.