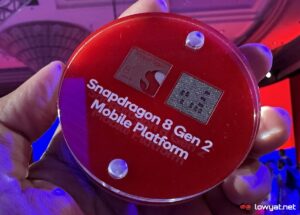 Qualcomm has just taken the drape off its new flagship mobile platform in the form of Snapdragon 8 Gen 2 (SD8G2). Following its traditional annual update cycle, one can expect improvement across multiple factors from the platform including general performance, graphics, AI, and imaging.

Let’s start with the basics: the SD8G2 mobile platform carries a 4nm 64-bit Kryo CPU that features an Arm Cortex-X3 Prime core with a clock speed of up to 3.2GHz. It also comes with four Performance cores that run at 2.8GHz together with three Efficiency cores with a clock speed that goes up to 2.0GHz.

Other than that, the improved GPU also allows the SD8G2 to become the first mobile platform to support Vulkan 1.3 and able to unlock up to 30% of performance uplift for the graphics API. Through the GPU, the Gen 2 is also able to deliver hardware-accelerated real-time raytracing as well as support for Unreal Engine 5 and Metahuman framework.

On the AI front, Qualcomm noted that this Gen 2 release carries the fastest and most advanced Qualcomm AI Engine to date. It is powered by an upgraded Qualcomm Hexagon processor that includes a bigger tensor accelerator that helps increased AI performance up to 4.35 times as well as micro tile inferencing capability.

Furthermore, the flagship Gen 2 platform is also the first Snapdragon mobile platform that able to support INT4 precision format which can help deliver up to 60% improvement in terms of performance per watt during AI inferencing. On the other hand, its Qualcomm Sensing Hub carries a dual AI processor and 50% more memory which also helped increased SD8G2’s AI performance.

For imaging, the SD8Gen2 relies on the 18-bit Qualcomm Spectra ISP which has a direct connection to the platform’s Hexagon processor, creating what the company dubbed as Cognitive-ISP. Among new features that the ISP has brought to the table includes real-time semantic segmentation for photo and video processing which is made possible through collaboration with Arcsoft.

The ISP also comes with new low light and bokeh engines, Pro Sight Video Capture, and AV1 codec that supports video playback of up to 8K HDR at 60 fps. It continues to support up to 200MP photo capture just like its predecessor although Qualcomm noted that the Gen 2 platform has been optimized for new sensors such as the 200MP Samsung ISOCELL HP3 while Sony’s new quad digital overlap HDR technology in IMX800 and IMX989 sensors has also been fine-tuned for Snapdragon.

For connectivity, the SD8G2 has been equipped with the Snapdragon X70 5G modem-RF system that the company originally announced back in February. There is also the FastConnect 7800 System that provides support for Wi-Fi 7 that can deliver a peak speed of 5.8Gbps and it also has integrated Bluetooth 5.3 capability.

Sound-wise, the new Gen 2 platform also brings spatial audio with dynamic head-tracking capability together with support for 48kHz lossless music streaming. The company also claimed that the new platform can deliver a low level of motion-to-sound latency of 48ms and a built-in voice backchannel which are two characteristics that may benefit gamers out there.

A long list of companies has already confirmed their commitment to the new Snapdragon 8 Gen 2 including ASUS’ ROG division, HONOR, iQOO, Motorola, Nubia, OnePlus, OPPO, Red Magic, Redmi, Sharp, Sony, vivo, Xiaomi, Meizu, and ZTE. In terms of actual devices, consumers can expect to see new Snapdragon 8 Gen 2-based products by the end of 2022 which means that they could be revealed within the next few weeks.