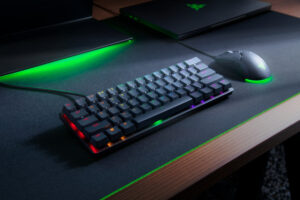 The Huntsman Mini Analog shares the same kind of Analog Optical proprietary switches as the V2 Analog from last year. This means it can do all the things its full-sized cousin can, which is controller-like velocity control. Push it half-way for a weaker input, all the way for a strong one, like an analogue stick or pressure sensitive trigger.

Like the full-sized version, this means that the Razer Huntsman Mini Analog keys have two actuation points that you can adjust. You can use it to set the equivalent of a deadzone, or actually use a single key for two different functions. The latter is not exactly the most practical of uses, but it’s there if you need it.

Being a 60% keyboard, the Huntsman Mini Analog is something that you’re meant to carry around. And for that it’s built with an aluminium frame and a detachable USB-C cable to facilitate that.