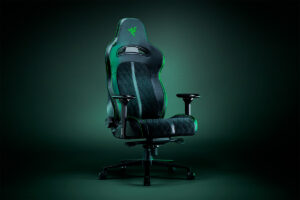 Razer has officially launched the Enki Pro, the latest entry to its Enki-branded gaming chair line which was initially teased during the debut of its siblings back in October of last year. Marketed as the higher tier variant, the new throne comes with some upgrades over the regular and X versions from the series.

For starters, the Pro inherits the same signature features of the Razer Enki line, namely the 21-inch ultrawide seat base, 110-degree extended shoulder arches, built-in lumbar arch, adjustable armrests, reactive seat tilt, and the ability to recline up to 152-degrees – all of which makes up the “all-day comfort” selling point offered by the series. And with this newer model, Razer is doubling down on that by introducing premium materials.

Unlike the standard and X variants, the Razer Enki Pro features Alcantara for its backrest and seat base, which is a suede-like microfiber that is designed to be durable, stain resistant and comfortable. The premium fabric can also be found on the seats of numerous luxury car brands, and even designer bags. Going hand-in-hand with it are outer edges of the chair that are lined with sustainable leatherette material, which Razer promises is capable of withstanding daily wear and tear.

Besides that, another new addition on the Pro is an all-new magnetic adjustable head cushion, which replaces the elastic strap version that is paired together with the standard Enki. The company assures that its magnetic feature is secure enough to avoid shifting during use. And like the original, the upgraded head cushion retains the memory foam material for the user’s comfort and support.

The new Razer Enki Pro gaming chair is available now for RM 4,299, exclusively via the gaming firm’s official online store. Undeniably, a very steep price for a slightly upgraded yet premium version of the original which launched at RM 1,599. Alternatively, if you’re looking for a more budget-friendly but stripped-down version of the chair, there’s always the RM 1,099 Enki X.