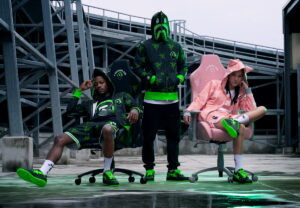 In addition to its collaboration with Tumi last month, Razer has also worked together with BAPE to further grow its collaborative product line-up further. The upcoming rollout of the new A Gaming Ape collection later this week is the second time that both the gaming outfit and Japanese streetwear powerhouse have worked together.

Released back in December 2020, the original A Gaming Ape collection was sold out in seconds according to Razer. Hence, it is not surprising that the company and BAPE decided to come out with another collection once again which features even more items than the first collection.

The 2022’s A Gaming Ape collection consists of three BAPE-themed Razer gaming products including the BlackWidow V3 keyboard, Protective Sleeve V2 for 15.6-inch laptops, and Iskur X chair. Gamers and hypebeasts alike can also get their hands on several Razer-themed BAPE clothing under the collection such as five different t-shirts, two sweat shorts, a Shark Hoodie, a pair of BAPE STA sneakers, and a snapback cap.

For those who are not familiar with BAPE products, then you might be shocked to see the pricing that has been attached to these new A Gaming Ape products then. While Razer’s announcement only covers the USD and Euro currency, a quick search through Razer Online Store for the APAC region has revealed the price list in Ringgit Malaysia as noted below:

Unfortunately, (UPDATE – 6:18 PM: the BAPE-themed Iskur X will not be released in Malaysia, according to Razer in its response to Lowyat.NET’s query) while Razer Skins are exclusive to the U.S, Canada, and China.

Razer’s announcement also noted that these products will be available via its online store on Friday, 22 July at 7:00 PM PDT. In Malaysia, that is equivalent to 10:00 AM on Saturday, 23 July.

Meanwhile, the BAPE Store Malaysia at Suria KLCC has confirmed through a post on its Facebook page that A Gaming Ape 2.0 collection will be released in-store on 23 July. Just like in 2020, the retailer once again didn’t list down the items that will be available for purchase at the store, so you may want to be present at the store as early as you can.

Similar to the Tumi | Razer collection, only 1,337 units of each product are going to be released worldwide. Hence, it goes without saying that only a handful of them are expected to be purchasable in Malaysia even with the hefty price tag that they demand.

The post Razer x BAPE A Gaming Ape 2.0 Is Coming To Malaysia; Price Starts From RM349 appeared first on Lowyat.NET.