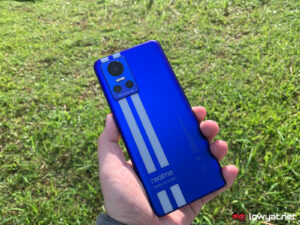 realme brought over its latest midrange offering to Malaysia a couple of weeks ago, the GT Neo 3. Running on the upper-mid-tier Dimensity 8100 chipset from MediaTek, both the phone’s design and its tagline — NEO Speed Awakens — emphasises how fast the phone is.

Over the past few weeks, I’ve come to actually love using the phone as my daily driver, but it’s got some quirks that may be a dealbreaker for some, considering its price bracket. I also have some personal grievances with the design, especially the back of the phone.

The realme GT Neo 3 we’re getting only comes in a single 8GB+256GB configuration but on realme Malaysia’s website, it does note that the phone can be configured with up to 12GB RAM. However, that configuration doesn’t seem to be available on realme’s Lazada store, so it remains to be seen if the brand will release a version with more RAM in the future.

Let’s jump right into it and talk about the thing that stands out the most about the phone — the racing stripes,  I loathe them. Just in general, I personally think racing stripes are a disease in design and they do not belong on cars, let alone on smartphones. I know this is going to rile up a lot of people that actually think it’s a cool design, but this is a hill I’m willing to die on.

That being said, the anti-glare glass on the back is undeniably fantastic as it hides most of my sweaty finger smudges. I haven’t gotten my hands on the white version but racing stripes aside, the nitro blue variant with the anti-glare is surprisingly gorgeous with a subtle colour-shift effect that makes it look purple at certain angles.

The phone is also quite light for its size, making it pleasant to hold all day for whatever reason you’d do so. I also have to compliment realme on going with a more practical flat display instead of the more trendy curved display. Unfortunately, the company put the selfie camera cutout in the middle of the screen instead of the corner.

The camera island features a 50MP main camera with OIS with its second level of elevation around the lens, an 8MP ultrawide, and a 2MP macro sensor. The downside to having a protruding model, though, is that the phone does wobble when using it on a flat surface if you’re tapping but just scrolling on the phone while it’s lying on a table isn’t an issue.

On the sides, you’ll find the volume rocker on the left and the power button on the right. The phone has stereo speakers with Dolby Atmos certification found on the top and bottom, with the latter also housing the USB-C charging port and the SIM slot but no headphone jack.

The GT Neo 3 unlocks with an under-display fingerprint sensor that’s placed just a bit too low for my liking. There is also no water or dust resistance certification to speak of, so you may be out of luck if you’re caught in heavy rain with this phone.

The display of the realme GT Neo 3 is buttery smooth and snappy, as expected of a 120Hz AMOLED panel. The front camera cutout, while relatively small, still serves as a noticeable distraction when watching content in fullscreen as realme decided the middle of the screen is where it belongs.

As for the under-display fingerprint scanner, it does strain my hand sometimes when I have to reach it while using one hand because the placement is just too low, as previously mentioned. It’s relatively quick and reliable when unlocking but it does fail sometimes when my finger gets too sweaty or oily.

The stereo speakers are good enough to watch content in a pinch, but I’ve definitely heard better-sounding smartphone speakers. Specifically, the highs peak too much for my liking, which makes it a bit unpleasant to listen to for long periods.

When put through synthetic benchmarks, it performed above average as expected with its chipset and while it did get a bit toasty, it was refreshingly nowhere near as hot as some Qualcomm Snapdragon 8 Gen 1 flagships that can initiate a hot potato game. realme claims that the phone can remain at a relatively warm 40C with 120 minutes of gaming and while I didn’t try to game for that long, my hands never felt uncomfortable holding the phone while playing Asphalt 9 and Genshin Impact.

While it’s unfortunate that our market won’t be getting the 120W charging, the bigger 5000mAh battery with 80W charging does feel like a worthy trade-off. The GT Neo 3 bulldozes through my daily usage without breaking a sweat and consistently finishes the day with 60% to 70% remaining, though my use of this phone was mainly hours of scrolling through social media and watching YouTube videos.

In fact, the battery life is good enough that most people can confidently use it without charging for two days straight, so long as they aren’t heavy gamers. For those who are, it can still easily last you an entire day. When put through the usual video loop test, the phone lasted about 14 hours with both the brightness and volume set to about 25%.

The main 50MP camera of the GT Neo 3 is satisfyingly sharp and fast, with great low-light performance. Snapping photos at dusk with this phone results in bright and clear images. The ultrawide, on the other hand, is more than usable in great lighting conditions but the images tend to be darker and duller.

Where the main camera falls apart is when trying to take indoor pictures at night, where the sensor’s higher light intake becomes a double-edged sword when paired with the phone’s aggressive post-processing software. Even when the situation doesn’t call for it, the app will automatically turn on night mode when it detects that you’re in less-than-ideal lighting conditions, which will result in images that are just unnaturally over-exposed and unusable.

There’s no way to turn this off from the regular photo mode, but you need to instead switch to the 50M mode which does not let you use the ultrawide or HDR. As for the 16MP front shooter, the colours are accurate and it does not do any face smoothening unless you turn it on, which is a huge plus as some brands have smoothening enabled by default for the selfie camera.

While the phone definitely earns its racing stripes in terms of speed, its value is another question entirely. It is priced on the very-high-end-side of midrangers, leaving it to compete with cheaper, similarly-specced phones and more powerful devices just above its price point.

The POCO X4 GT is one of the latest offerings from the brand, which also uses the same Dimensity 8100 processor as the GT Neo 3.  It similarly comes with 8GB of RAM, up to 256GB of storage, 5G, Wi-Fi 6, Bluetooth 5.3, and just a slightly bigger 5,080mAh battery.  It features a triple-camera setup with a 64MP main lens, 8MP ultrawide, and a 2MP macro.

While the X4 GT uses the same chipset as the GT Neo 3, it costs a staggering RM500 less at only RM1,599 for the 8GB + 256GB configuration and is even cheaper if you don’t need that much storage. The only catch to the significantly lower price tag is that its 6.6-inch display uses an LCD panel instead of an OLED, so you won’t get those deep blacks. It also has a slightly slower charging speed of 67W.

The POCO F4 GT is the most affordable Snapdragon 8 Gen 1 smartphone in the Malaysian market at the moment and is also geared towards gaming. It features a 6.67-inch AMOLED display with a 120Hz refresh rate, magnetic pop-up triggers, Bluetooth 5.2, and Wi-Fi 6E. The triple-camera array consists of a 64MP primary shooter, an 8MP ultrawide, and a 2MP macro lens.

The phone starts at RM2,299 for the 8GB+128GB, which is only RM200 more than realme’s mid-ranger for a flagship device. Aside from the more powerful processor, the phone also has faster 120W charging.

The realme GT Neo 3 is an excellent device that’s easy to hold and consistently performs in a snappy manner with most tasks. While the racing stripes are a dealbreaker for me, I realise that most people don’t have such strong opinions about it and won’t care one way or another once they experience the smoothness of the anti-glare glass.

The camera is a reliable companion in most conditions but its utility is practically bricked in certain cases thanks to realme’s insistence on automating night mode. At the very least, it’s a device that can last throughout the day no matter what you throw at it, so you won’t have to worry about reaching for the charger most of the time.

The pricing for the phone, however, is just ridiculous when considering that some of its competitors are much cheaper with similar specs and that it is creeping into flagship territory. If you were able to get the phone for its promotional price of RM1799, then that would make it easier to swallow but for its retail price of RM2,099, I would rather just pay the price difference for the POCO F4 GT.