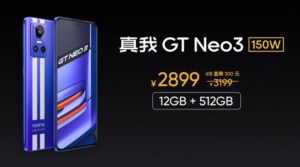 Realme recently launched a new version of its GT Neo3 smartphone in China. The updated version was released shortly after the debut of the GT Neo3 Naruto Edition, but what sets it apart from the other GT Neo3 models is its massive internal storage capacity.

The newly unveiled model offers double the internal storage at up to 512GB, while still retaining the same 12GB RAM.  In terms of pricing, this particular model of the phone retails for RMB3199 (~RM2103) but will retail at a discounted price of RMB2899 (~RM1906) for the duration of the country’s ongoing 618 Shopping Festival.

As for the phone’s remaining specs, the GT Neo3 also features an upgraded 4,500mAh battery with support for 150W fast-charging. Alternatively, the model with the 5000mAh battery is still  on offer, but its fast-charging rate is reduced to 80W, but that’s still fast. As for its processor, it is still powered by MediaTek’s Dimensity 8100 SoC.

Irfan Iskandar contributed to this article.