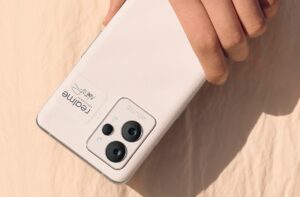 Realme has recently unveiled the design of the Realme GT 2 Pro, which it claims to be its first premium flagship smartphone. Prior to this, the company confirmed that it will pack the new Snapdragon 8 Gen1 chipset, and also revealed that it would be the world’s first handset to feature a 150-degree ultra-wide lens as part of its camera setup.

As shown in a set of images shared by Realme, the new GT 2 Pro sports a curved rear panel with paper-inspired texture, along with a rectangular island for its rear triple camera array. Also visible is a small partition featuring the company’s branding and a signature by the phone’s designer Naoto Fukasawa, who is well known for designing products for Japanese lifestyle brand MUJI. As you may recall, Fukasawa previously contributed to the design for the Master Editions of this year’s Realme GT and 2019’s Realme X.

Here’s the first look of the #realmeGT2Pro. Inspired by paper, and co-designed by Naoto Fukusawa and realme design studio, the realme GT 2 Pro is the world’s first smartphone to feature a bio-based polymer design. pic.twitter.com/RvDI107oQL

It turns out that the paper-like texture isn’t just for show either. Realme detailed that the material used to create the panel is made from paper pulp-based biopolymer. In addition, it also promised that the GT 2’s packaging will use less plastic than its predecessor, with an overall ratio of only 0.3%.

Being user-friendly is not enough, and realme is constantly innovating to contribute to the environment by being eco-friendly.
Introducing #realmeGT2Series with Paper Tech Master Design – taking our first step towards sustainability in mobile devices. #realmeGT2Pro pic.twitter.com/kZIf13OC5s

The new phone will also feature the brand’s Antenna Array Matrix System, which is claimed to be the world’s first ultra-wide-band antenna switching technology. Basically, it enables the phone to switch between its 12 antennas in order to get the best signal.

Apart from the 150-degree ultra-wide, not much has been revealed about the other two cameras featured on the Realme GT 2. Interestingly, GizmoChina claims that the phone will feature an under-display selfie camera, although we highly suggest to take this information with a grain of salt until the company actually confirms this.

Interestingly, leakster Steve Hemmerstoffer (aka OnLeaks) claims that this particular model that Realme is showcasing is actually the limited Master Edition of the phone and not the retail variant. As you may recall, the leakster previously shared the alleged design of the GT 2 last month, which features a completely different look for its rear panel. Whether this is actually the case (no pun intended) remains to be seen, but Hemmerstoffer’s claim does make sense as Realme previously only featured Fukasawa’s design for its Master Edition releases.

Following @vogue_italia post regarding the #RealmeGT2Pro Series, some ppl think the renders I shared few weeks ago are wrong. Yeah…

FYI, the device shown by @voguemagazine actually is the “Master Edition” while mine is a different and camera performances focused variant…

As to when we’ll be expecting the official launch, Realme founder and CEO Sky Li announced via Twitter that the event will be held in China next year, on 4 January. As with its recent product launches, it is expected that it will also be streamed live via the brand’s official website and various social media channels.