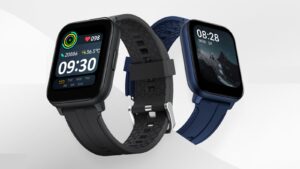 realme has launched a new smartwatch that packs a lot of the bells and whistles you would come to expect that is placed in a very affordable package. Despite being dubbed a “smartwatch” though, the realme Techlife Watch SZ100 doesn’t have Google’s Wear OS but instead runs on a proprietary system.

It features a 530-nit peak brightness 1.69-inch LCD display with curved edges and a single button on the side. You can choose from either blue or grey and it has a removable silicone strap. Additionally, you can customise the watch face with over 110 different styles built into the watch.

The Techlife Watch SZ100 has 24 different sports modes to track and analyse your workouts, including basketball, yoga, hiking, and dancing, among others. The watch is also IP68 water-resistant and is rated for use up to a maximum depth of 1.5 meters, though the company says that this apparently isn’t suitable to be used while swimming or showering.

While it seems like enough for most people, it does seem quite lacking when compared to last year’s Watch 2 Pro which came with 90 sports mode, but the Pro costs twice as much. realme’s latest budget smartwatch also lacks built-in GPS, so you won’t be able to track your running routes with the watch alone.

realme claims that the watch is equipped with “professional-level” PPG sensors that include a heart rate monitor and a blood oxygen saturation (SpO2) sensor, as well as a skin temperature sensor. With all its sensors, the watch can also monitor your sleep and tell you how to improve your sleeping habits.

The realme Techlife Watch SZ100 sports an impressive 12-day battery life and has useful features when connected to your phone such as music control, photography control, and phone finding. It is priced at Rs 2,499 (~RM140) and will be going on sale in India on 22 May. The company has not yet announced any plans on making the watch available in other markets.