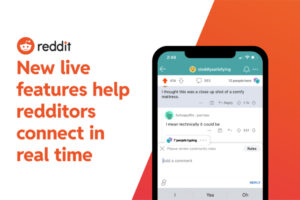 Reddit is rolling some new live features across its platform that is apparently meant to make Reddit “more lively”. The update introduces features that will display real-time interaction between users through new animations, in an attempt to increase engagement.

The vote and comment count is now more dynamic, and will change in real-time to reflect changes. This means that when you’re scrolling, you’ll see the vote count on each post go up and down, as well as the number of comments.

There’s also a new comment pill that will show up while you’re scrolling down a post’s comments, which will tell you how many new comments have appeared since you last refreshed the page. And to top off this refresh, there will also be typing indicators in the comments, like in chat apps.

When five or more redditors are reading a post at the same time, the platform will also display a live indicator of how many users are active in the post. As for privacy, the indicators will only use grouped anonymous avatars.

The live features are rolling out on Reddit’s iOS app, Android app, and desktop website. Reddit said that the vote and comment count animations are optional, and can be turned off in the user animation settings.