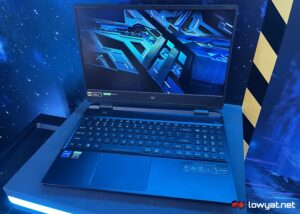 Aside from the 2022 Nitro 5, Acer has also officially launched another gaming laptop in Malaysia. Just like its Nitro sibling, the 2022 edition of the Predator Helios 300 also made its world debut earlier this year at CES.

Similarly, the new model also features a new chassis which looks slightly sleeker than its predecessor. That doesn’t mean the laptop has lost its “gaming” vibe though as the Predator team has added a thin RGB light bar below its palm rest area alongside having a per-key RGB backlit keyboard with Mini LED backlights.

Both of these RGB areas can be customised using the PredatorSense app that can also be used to overclock the laptop and manually control its fan speeds. Additionally, the Helios 300 continues to feature the Turbo button that allows users to quickly access the Helios 300’s full firepower.

Ultimately, you can choose to swap the RTX 3070 Ti with an RTX 3080 for RM11,999. The new 2022 Predator Helios 300 is now readily available through Acer Malaysia eStore and Acer official stores in Lazada as well as Shopee.

The post Redesigned Predator Helios 300 Lands In Malaysia With A Starting Price Of RM7,999 appeared first on Lowyat.NET.