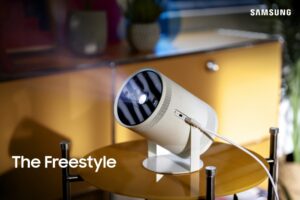 When you think of projectors, it’s likely that some other brand would come to mind before Samsung. But at CES 2022, the Korean tech giant has announced the Samsung Freestyle, which is its portable projector.

Size-wise, the Samsung Freestyle looks to be pretty substantial. But it does come with a fair range of features to justify its size. To start, it is capable of creating images of between 30 to 100 inches. It also comes with an auto-setup system, which involves a built-in time-of-flight sensor and a 3-axis accelerometer. Together they help the projector calibrate itself to the surface it’s aimed at, from auto-keystone and auto-levelling to focusing.

Image resolution is Full HD, which may be a drawback for some. For audio, the passive radiator gives it 360-degree audio projection. Power comes in the form of USB-C. It also has a waterproof case accessory.

The cradle that the Samsung Freestyle comes with lets it rotate up to 180 degrees. There’s also a base that adds an E26 lightbulb screw, so you can attach it to a lamp if you want to use it that way. Of course, in addition to using it as just a projector, you can use it sort of like a portable TV, to stream from Netflix, or cast your phone’s screen. There’s even a Micro HDMI port for if you want to plug in your laptop or console.

The Samsung Freestyle has a price of US$899, which is pretty pricey for a Full HD projector. It’s currently up for pre-order in the US, but will only launch elsewhere later this year. No word yet on when that is, and what price it will have when, or if, it comes here.

The post Samsung Freestyle Is The Company’s Portable Projector appeared first on Lowyat.NET.