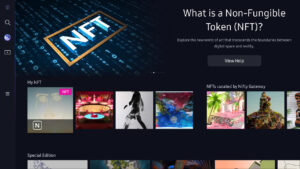 Samsung has joined in the Non-Fungible Token (NFT) wave as it announces that you will soon be able to stare at your digital artwork on its new smart TVs. The company is launching a new “NFT Aggregation Platform”, starting with this year’s MicroLED, Neo QLED, and The Frame smart TV lineups.

Through its platform, users will be able to browse and buy NFTs that will be aggregated from several marketplaces, though Samsung hasn’t yet revealed which marketplaces specifically. Of course, you’ll be able to view any NFT artwork you own, with the TVs aimed at being your main NFT hub.

When browsing, Samsung says that users will be able to preview relevant metadata such as who was the original creator of the piece, as well as the NFT’s blockchain history. Users will also be able to use the platform to trade NFTs.

Samsung’s NFT platform will feature smart calibration to preserve how the digital artwork was intended to look like, which will automatically adjust the display settings according to the original creator’s preset values. The tech giant now joins the list of companies that are embracing NFTs, including Square Enix, Twitter, and even Louis Vuitton.