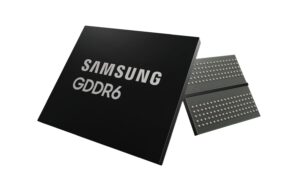 Samsung Electronics officially began sampling its new GDDR6 graphics memory. They are, in effect, one of the industry’s 16Gb chips, capable of operating at speeds of 24Gbps.

Expanding on its specifications, the new Samsung chip is built on the brand’s own 3rd generation 10nm process, done through extreme ultraviolet (EUV) technology. Further and to state the obvious, Samsung’s intended target market is obviously for the GPU makers and their graphics cards, which includes the likes of NVIDIA, AMD, and as of late, Intel. The latter having recently just officially jumped into the GPU market with its ARC series lineup.

“The explosion of data now being driven by AI and the metaverse is pushing the need for greater graphics capabilities that can process massive data sets simultaneously, at extremely high speeds,” Daniel Lee, Executive Vice President of the Memory Product Planning Team at Samsung Electronics said. “With our industry-first 24Gbps GDDR6 now sampling, we look forward to validating the graphics DRAM on next-generation GPU platforms to bring it to market in time to meet an onslaught of new demand.”

In terms of performance, Samsung says its 24Gbps GDDR6 memory should, on paper, deliver up to 30% faster speeds, when compared to its previous generation 18Gbps GGDR6 memory modules. Further, the new graphics memory is able to facilitate data transfers of up to 1.1TB in a single second.

Besides the new 24Gbps chips, Samsung has also set aside new 20Gbps and 16Gbps variants of its new GDDR6 chips. While the 24Gbps variant will be sampled for high-end graphics cards, Samsung is aiming for the latter two with lower speeds to be considered as lower power options, making them ideal for laptops. To that end, they both feature a dynamic voltage switching (DVS) technology that allows the chips to adjust their operating voltage, based on performance requirements. On paper, these new chips should run at 1.1V, versus the current industry standard of 1.35V.