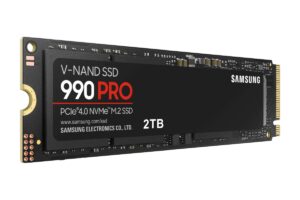 Samsung officially launched the 990 Pro, its latest PCIe Gen4 SSD, in Malaysia. Starting today, the ultra-fast M.2 form factor SSD is available for purchase at all authorised and participating Samsung dealer and their respective stores.

The 990 Pro is an improvement over Samsung’s previous generation 980 Pro NVMe Gen4 SSD. Specs-wise, the Korean brand says that its sequential read and write speeds have the capability of hitting 7450MB/s and 6900MB/s, respectively. Additionally, the SSD is available in both 1TB and 2TB capacities, with the same speeds applicable to both of them.

Other specifications of the 990 Pro SSDs include the fact that the storage chips soldered on to the M.2 PCB use Samsung’s V-NAND 3-bit MLC, while the Cache Memory modules are 2GB Low-power DDR4 SDRAM. Further, it also has AES 256-bit Encryption support, making it a viable option for consumers on the market for a storage format with an extra layer of protection.

On another note and besides the capacity options, Samsung is also offering 990 Pro with or without a heatsink, designed especially for the SSD. On a side note and because of its lightning-fast transfer speeds, the SSD is not just good for use in PCs, Samsung also rates it as being compatible with Sony’s PlayStation 5 (PS5) console. As an extra added bonus, the slim heatsink also has a single-strip RGB LED built into it, which we’re guessing provides desktop PC users with extra layers of aesthetic appeal.

At the time of writing, Samsung Malaysia did not provide the local starting price for the 990 Pro. We’ve reached out to the brand regarding the matter.