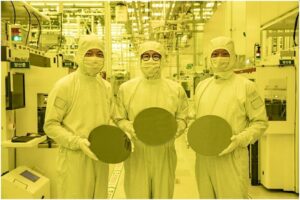 Samsung Electronics recently announced that it was ready to launch a brand new batch of semiconductor chips, based on a 3nm die lithography. The announcement comes less than a month after the Korean electronics giant put the chips into mass production, back on 30 June.

Just so we’re clear, Samsung launching its 3nm process isn’t the same as making it available. It will most certainly send out samples to a handful of its manufacturing partners but as it stands, the Korean brand doesn’t have any plans on making them more widely available until next year. On a slightly related note, it also plans on having its next-generation 2nm chips ready for manufacturing by the year 2025.

The move by Samsung to launch its 3nm so soon has been met with much skepticism, seeing not even the Korean giant’s direct competitor, TSMC, has yet to launch its own batch of 3nm process nodes, of which several major tech giants like Apple, NVIDIA, and AMD, have already called dibs on, even before they’ve gone out the door. Having said that, there is no doubt that the company has now taken the lead in this race.

Still touching on that comparison, Samsung’s 3nm process is said to be more advanced than the current FinFET technology that is still currently employed by more fab plants. TSMC’s 3nm, in particular, is only expected to go into production for the process sometime this month, and it will be FinFET-based, while a Gate-all-around (GAA) design by the Taiwanese chipmaker is only expected in 2025.

That being said, Samsung’s achievement in widening the gap in the 3nm race have clearly struck a chord with its Japanese and Taiwanese rivals. News outlets such as Nikkei says that the Korean chipmaker’s first batch is still highly dependent on Japanese materials, and that said batch will first be going to a Chinese cryptocurrency miner and that the client cannot be trusted in the long term. Honestly speaking, it’s a move that would clearly draw ire and sharp comments from several players, given the current state of Bitcoin.