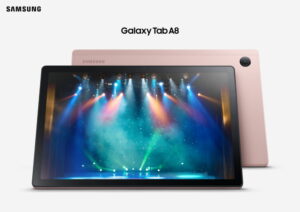 Samsung has announced a next-gen refresh of its A series tablet, known appropriately as the Galaxy Tab A8. Among the numerous upgrades introduced in this latest iteration includes a slightly larger display size and multiple memory configurations.

The new Galaxy Tab A8 features a 10.5-inch TFT LCD panel with a resolution of 1920 x 1200 px which is, as with its predecessor, surrounded by a thick bezel. While not particularly obvious and as mentioned above, the tablet’s screen offers a slight size upgrade over its predecessor’s 10.4-inch display. Additionally, Samsung says that the device will come with One UI’s Drag & Split feature which enables for split-screen multitasking and floating windows.

In terms of specs, the company did not name the included chipset featured on the next-gen Galaxy Tab A8, but promises a 10% increase of CPU and GPU performance over its predecessor. Prior to this, rumours suggest the tablet may not be equipped with either an Exynos, Qualcomm or MediaTek processor, but instead a 12nm Unisoc Tiger T618 SoC.

Memory-wise, it will be available in three different memory configurations: 3GB RAM + 32GB storage, 4GB + 64GB, and 4GB + 128GB. However, like this year’s Galaxy Tab A7, it is likely that some options may not be available in certain regions. The new tablet is also offered two connectivity options – one variant featuring only Wi-Fi support, while the other comes with both LTE and Wi-Fi. Keep in mind that Malaysia only received the former variant for its predecessor, and that may apply for the next-gen device as well.

Other than that, the Samsung Galaxy Tab A8 comes with Wi-Fi 5 and Bluetooth 5.0 support, a 3.5mm headphone jack, four Dolby Atmos speakers, and a USB-C port for both data transfer and charging. Featured onboard is a 7,040mAh battery with 15W fast charging support, although included together with the tablet in the box is only a 7.5W charger.

In terms of imaging, on the back of the device is an 8MP main camera. It is also worth noting that the shooter is now housed within a circular bump rather than a square one like its predecessor, though its rear panel retains the same minimalist design as before. Meanwhile, housed within one side of its bezel is a front-facing 5MP camera for video conferencing and selfies.

The new Samsung Galaxy Tab A8 is slated to go on sale in Europe later this month, with other regions expected to receive it sometime in January 2022. The company did not specifically mention if Malaysia will be included in the latter, however. Price-wise, the device is set to retail from EUR230 (~RM1,099), according to Samsung Netherlands (via GSMArena). Lastly, the tablet will be available in Gray, Silver, and Pink Gold colour options.

The post Samsung Unveils Next Generation Galaxy Tab A8 appeared first on Lowyat.NET.