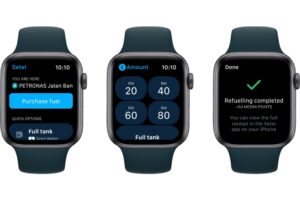 Setel started as an e-wallet that exclusively allowed you to pay for petrol at Petronas stations. That has since been expanded to be usable outside of petrol stations, including parking payments, even if the latter is only for Suria KLCC right now. More recently, the app is teasing something new involving the Apple Watch.

The teaser comes from the official Setel Twitter account, which has the apple and watch emojis, as well as the phrase “stay tuned”. Unfortunately, there’s not much else to the tweet, but a dedicated Apple Watch app would be a great addition to the current iOS and Android apps.

That being said, a quick Google search shows a now-locked page by Melan Yapa, who is a senior product designer at Setel, responsible for not only mobile apps but also the Apple Watch app. The page shows what is claimed to be the final design for the app, with a working prototype as well.

According to the page, Setel was “not focused on building an Apple Watch app”. Melan went ahead to design a demo app to convince stakeholders of the benefits of having one.

All in all, the Apple Watch app for Setel looks like it will work pretty much like the smartphone equivalent. It also looks quite complete, and is just awaiting the official launch. Though it’s worth noting that, according to the web page in question, the app initially had a launch scheduled for December 2021. It may be past the initial window, but now that the official Twitter account has put up a teaser, the official launch is likely coming soon.

The post Setel Teases Launch Of Apple Watch App; Here’s What It May Look Like appeared first on Lowyat.NET.