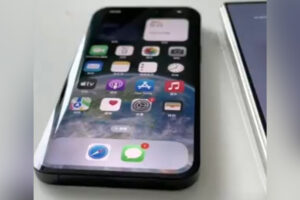 Apple has been adamant (or stubborn) when it comes to embracing certain new technologies, especially in the smartphone segment. The most apparent example is its iPhone 14 series, which finally adopted display cutouts on the Pro variants. And as most of us are aware by now, this particular feature has been a common recurrence on numerous devices produced by competitors such as Huawei, Xiaomi, and Samsung for several years now.

Even though the Cupertino-based tech giant appears to have succumbed to some innovations not of their own, it still continues to reject others. One of which being curved displays; a feature that is often reserved for premium-tiered Android smartphones. But if you ever wondered how a current generation iPhone would look like featuring a curved display, fret not. Someone has apparently gone through the trouble to make that a reality – not through 3D renders or sketches, but by modifying an actual Apple smartphone.

The person in question is a Twitter user who goes by “fix Apple” or @lipilipsi, who claims to be an engineer of some sort. Through a set of photos and a hands-on video, it is suggested that he has successfully modified an iPhone 14 Pro Max to feature a fully functional curved display. Apart from mentioning a change to the phone’s frame, @lipilipsi did not detail how this conversion was achieved.

The user also claims that he can help you modify your iPhone 14 Pro Max to feature the screen for an undisclosed charge if you’re willing to send it to him. Unless you’re cool with entrusting a complete stranger your own unit (let alone sending it to them), we wouldn’t recommend you to take up on such an offer. Despite allegedly providing visual proof, we do feel that the whole thing seems somewhat suspicious.

Amusingly, seeing an iPhone featuring a curved screen has triggered a sense of nostalgia, as it reminded us of the good ol’ Samsung Galaxy S6 edge – minus the thick bezels on the upper and lower part of the display. As demonstrated by the short hands-on video, everything seems to be working fine, and the conversion could potentially pass off as an official product at first glance.

I make curved display iphone 14 pro max if u want to make this send me your phone we need to change middle frame pic.twitter.com/qTJVGY6BHk

However, those familiar with Apple’s design language would agree that a curved screen just doesn’t seem right, especially when it features a thick flat frame. That, or like the iPhone’s now-iconic triple camera arrangement, takes a while of getting used to.

Of course, this wouldn’t be the first time someone has decided to give an Apple smartphone a non-traditional makeover. Earlier this month, a group of independent engineers from China successfully converted an iPhone X into a fully functional clamshell phone, thanks to parts salvaged from two 2019 Motorola Razr units. The process itself took the team nearly a year with plenty of trial and error in order to have everything working in order.

Now, as to whether Apple would actually adopt these “unconventional” design choices for its future smartphone models remains to be seen. That being said, chances are, we’re more likely to see a foldable iPhone rather than one featuring a curved display.

The post Someone Apparently Gave An iPhone 14 Pro Max A Curved Screen appeared first on Lowyat.NET.