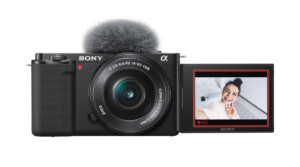 Sony is hitting the pause button on orders for its ZV-E10 mirrorless vlogging camera. The Japanese electronics giant posted the notice via its Japanese notice board earlier this month (it’s in Japanese, by the way), citing the ongoing global chip shortage as the primary reason for its decision.

The ZV-E10 was first announced back in July this year but only arrived on our shores in September. What makes the camera appealing to its target market is its compact form factor, weight, and its 24MP APS-C sensor that is capable of recording 4K videos at 30fps or Full HD videos at 120fps. Other features of the camera include time-lapse and slow-motion video recording, plus a “product showcase mode” that was first introduced with the Sony ZV-1.

Specifically, Sony says that the shortage has caused a delay in procurement of parts for its “digital imaging products” and that it “deeply apologises” for the delay. In all honesty, it’s hard to blame the company, especially when they’re not the only ones feeling the pinch of the silicon starvation. Case in point, Canon announced that customers who ordered its new EOS R3 would have to wait up to half a year before they can receive their orders.