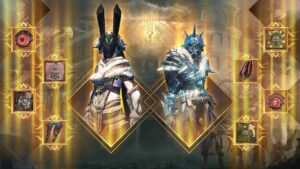 Square Enix released Babylon’s Fall earlier this month, to little fanfare and just as little critical praise. The publisher is now looking for feedback from players to improve the game.

The survey itself is fairly straightforward, as far as surveys of its kind goes. Though there looks to be a focus on visuals, art style and graphics. These range from if you like the weapons and armor sets of playable characters and NPCs to the “oil painting style” graphics in its maps.

Which, if you’ve played the game or are actively following it, are probably not the main problems the game suffers from. That’s not to say that there’s no improvement necessary to be had in that department, but there are probably other aspects that require more immediate attention.

If you’re not familiar, Babylon’s Fall is another live service type game. Even if it was developed by Platinum Games, combat is surprisingly middling. The grind is obnoxious, even for a live service game, which usually is not a new standard anyone wants to set.

If you’re invested in seeing Babylon’s Fall improve, you can access the survey by hitting the link below. Though you’ll have to do it before 18 March.