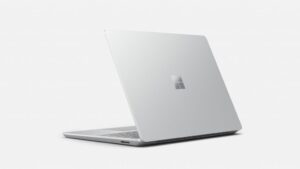 Barely a month after it was first revealed to the world, Microsoft has officially announced that the Surface Laptop Go 2 is now available in Malaysia. Today’s announcement is in line with the company’s promise to launch the device in our market this month although we didn’t expect it to arrive this fast.

In Malaysia, the Laptop Go 2 is available in two storage options. For RM3,488, you would get yourself the unit with a 128GB solid state drive while the 256GB version carries a price tag of RM3,788.

Aside from the storage space, the rest of the hardware is the same. Powered by Intel Core i5-1135G7, the Laptop Go 2 in Malaysia comes standard with 8GB of LPDDR4x RAM.

At the same time, its general hardware includes a 12.4-inch PixelSense touch display that has a 3:2 aspect ratio and a native resolution of 1536 x 1024. Microsoft has also packed a 720p HD f/2.0 webcam into its new compact laptop alongside dual far-field Studio Mics and Omnisonic speakers that have been enhanced with Dolby Audio Premium.

I/O-wise, the Go 2 has one USB-A and USB-C port as well as a 3.5mm headphone jack and Surface Connect port. Accompanied by a 39W power supply, the company also noted that the laptop’s 41Whr battery is able to provide up to 13.5 hours of operational time and even though the Laptop Go 2 was originally announced with four different colourways, the Malaysian variant is only available in Platinum.

As mentioned earlier, the Surface Laptop Go 2 is readily available in Malaysia through authorised dealers across the country such as All IT, Gloo by SNS Network, Harvey Norman, PC Image, Senheng, and TMT by Thundermatch. If you live in Klang Valley, you may visit the Microsoft Concierge at Harvey Norman Pavilion Bukit Jalil and Gloo Plaza Low Yat to take a closer look at the new laptop.

The post Surface Laptop Go 2 Is Now In Malaysia With Starting Price Of RM3,488 appeared first on Lowyat.NET.