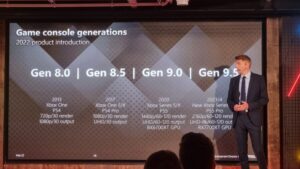 Ever since the previous console generation, gamers have begrudgingly gotten used to the idea of the mid-generation upgrade. But while we more or less expect this console generation to have something similar, the latest news on a potential PS5 Pro and its Xbox counterpart comes from the most unlikely of sources, which is consumer electronics maker TCL Technology .

TCL claims in the slide that the PS5 Pro, alongside its Microsoft counterpart, will be releasing the generation 9.5 consoles between the years 2023 and 2024. The company also predicts that these machines will be capable of outputting resolutions of up to 8K, and up to 120fps.

Looking at the previous console generation, which lasted seven years, it’s easy to see where this mid-generation prediction came from. After all, the PS4 and Xbox One were released in 2013. The PS4 Pro and Xbox One S would show up on the scene in 2016, and the Xbox One S coming in a year later.

That being said, it’s pretty interesting to see TCL being so confident with this mid-generation console timeline as to present it this way in a conference. On one hand, you can chalk this up to wishful thinking by the company. But on the other, it’s not impossible that the company knows something that no one else does yet. And while the chip shortage is causing supply bottlenecks for the current PS5 model, it remains to be seen what effect this has on what the console makers are working on in the background.