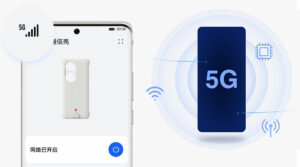 Thanks to US sanctions, Huawei is unable to equip their latest handsets with 5G connectivity, therefore denying its users to enjoy the infrastructure’s speeds that has been hyped up by numerous telco companies and the likes. However, a workaround for this has been developed by a third-party Chinese company known as Soyealink, but only available for the company’s P50 Pro flagship for now.

Their solution? A phone case with integrated 5G modem and eSIM support, which is actually pretty clever.

According to Soyealink, this particular Huawei P50 Pro case comes equipped with a 5G modem that supports sub-6Ghz and NSA+SA, and features an unspecified basic dual-core 1.35GHz processor. On its own, the polyurethane case measures around 3.2mm thick and weighs at 52g.

It also has a USB-C connector which is used to connect to the smartphone, while found beneath that is a port of the same type that is used for data transfers or charging. Soyealink adds that the 5G-enabled case also comes with Huawei’s SuperCharge support for quick battery topups. On that note, keep in mind that it does not feature its own battery pack, so it relies on the connected P50 Pro for power.

Enabling 5G on the Huawei P50 Pro via the case is pretty straightforward, but does involve several steps. These include granting access to the accessory, configuring and syncing your 5G-capable SIM card to its built-in eSIM through Soyealink’s companion app, and so on. Once successfully set up, an independent 5G indicator will appear on the top left of the phone’s display. And it goes without saying that the P50 Pro must be attached to the case if you wish to continue enjoying using the faster connection.

Soyealink’s innovative case for the Huawei P50 Pro is slated to be available in China soon for CNY 800 (~RM 521) and is only offered in an off-white/grey colour. Unfortunately, it is not known whether the company will ship the accessory out to other countries, or is planning to develop similar casings for other Huawei phones.

The post The Huawei P50 Pro Finally Gets 5G, But Only Through A Third-Party Case appeared first on Lowyat.NET.