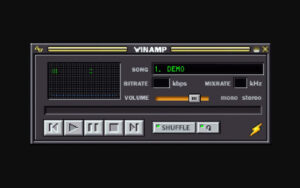 Ever wanted to own an iconic part of internet history? If your answer is yes, then you’ll be glad to know that the classic Winamp media player interface (shown above) will be put up for auction as a non-fungible token (NFT) later this year.

Winamp, now owned by Radionomy and reintroduced as a mobile audio app, revealed that it will auction the original interface (or skin, for the hardcore users of old) on popular NFT marketplace OpenSea between 16 and 22 May 2022. Following this, the brand will also put up the sale of 1997 NFTs based on 20 artworks inspired by Winamp’s iconic UI on the platform for 0.08 Ethereum. And just in case you’re wondering, the total number of tokens placed on sale is set intentionally to celebrate the media player’s first launch in the year 1997.

Proceeds of the auction of the original skin and the following sale of Winamp artwork NFTs will go to the Winamp Foundation, which promises to donate them to various charity projects such as the Belgian nonprofit music fund. Artists contributing to the aforementioned artworks will receive 20% of the proceeds from each sale, and will also geet 10% of any royalties on later sales, based on the prices set by current owners of each NFT.

Without a doubt, Winamp had played a significant role in the early years of the internet age. Being a free application that supported the MP3 audio format (among others) and also coming at only one-fifth of a megabyte for download, it had become the most widely used media player in the world. Although no longer officially supported, users can still download version 5.8 of the software via Winamp’s official website for nostalgic reasons. That, or maybe you are still adamant of not using Windows Media Player to play your music collection even after all these years.

The post The Original 1997 Winamp Skin Will Be Auctioned As An NFT In May appeared first on Lowyat.NET.