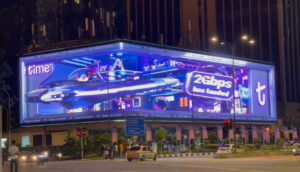 UPDATE [3:32 PM]: TIME Internet has officially revealed the pricing for its new 2Gbps plan. More details are in our follow-up report right here.

Over the past few days, TIME Internet has been teasing a big launch on its Facebook page. One particular teaser carries the “2x Speed” remark which seems to hint that the Internet service provider is about to launch new plans that are much faster than its current offerings.

It turns out that will indeed be the case.  As reported by Amanz, an advertisement on the gigantic screen at the famed Jalan Ampang – Jalan P.Ramlee crossroads in the KLCC area has revealed TIME Internet’s new 2Gbps plan.

Aside from stating that the 2Gbps plan is here, the advertisement did not carry any other information though and the new plan has not yet been listed on TIME Internet’s website. However, all the teasers that have been published by the ISP so far have noted that the big launch will take place on 7 October, so expect vital information including pricing to be revealed tomorrow.

While the company may have very competitive pricing when it comes to its Internet plans, its coverage is not as extensive as its major rival, TM. According to its coverage map, TIME Internet service is currently available only in selected areas within Klang Valley, Melaka, Penang, Perak, and Johor.

Nevertheless, TIME Internet is still an active participant in the national fiberisation effort under the Jalinan Digital Negara (JENDELA) plan. According to JENDELA’s Q2 2022 report [pdf], the company has managed to surpass its fibre rollout target for the period between April to June 2022 and even though the report didn’t provide an exact figure, the number of deployments that it has embarked on was just under 50,000 premises which was the second highest after TM.