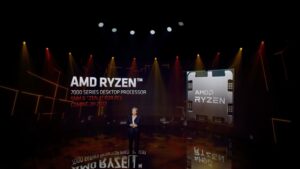 AMD is expected to launch its Ryzen 7000 series lineup sometime in the third quarter this year. That said, the rumour mill has continued churning out rumour nuggets online, the most recent one relating to the lineup’s top-of-the-line CPU.

According to a tweet by Greymon55 (@greymon55), he alleges that AMD’s top-tier CPU in the Ryzen 7000 series will be a 16-cores, 32-threads processor and will have a TDP of 170W. In contrast, the current top-tier Ryzen 9 5950X has an operating TDP of 105W, meaning that the 5nm Zen4 architecture is going to be a power hungry beast of a CPU.

Because of this alleged higher power consumption, there is also a rumour that the 170W CPU may require a liquid-cooling AIO to operate, and one with a 280mm radiator, at the very least.

To quickly recap, AMD’s Ryzen 7000 series will also feature a new LGA1718 socket, marking the second time the CPU maker has moved away from the PGA socket. More importantly, the new chipset will also support the new DDR5 memory standard and PCIe 5.0.