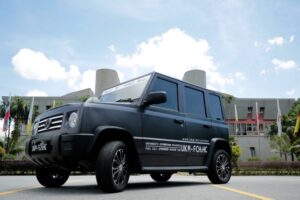 By far the better known alternative to petrol cars are their electric counterparts. Less talked about these days are those that run on hydrogen fuel cells. But it looks like two researchers from Universiti Kebangsaan Malaysia (UKM) have developed two such vehicles.

The first of the two is a modified buggy, designated UKM-FCH2B, which runs on a hydrogen fuel cell as well as a 3000W power generator to run its electrical appliances. The other, and the more interesting of the two, is the UKM FCH2HC SUV. This is a hybrid vehicle that uses both hydrogen fuel cells and a battery, running “in a 0.5 ratio, with each power source capable of providing a capacity of up to 10kW”.

Hydrogen fuel cell tech is far from new. One of the researchers, Professor Ir D. Siti Kartom Kamarudin says that “we began this project 15 years ago”, referring to the research into the hydrogen-run vehicles.

Hydrogen fuel cells are seen as another green alternative to petrol for vehicles. But it would not take hours to get an empty tank up to full. In fact, with refueling times needing less than three minutes, it’s more comparable to the experience with existing petrol-powered cars. And the only waste product that it produces is water vapour.