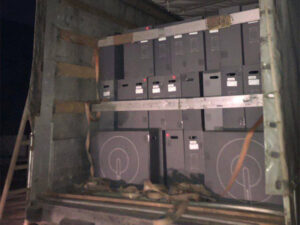 War-torn Ukraine has confirmed that it has received Starlink internet terminals after a brief exchange on social media with billionaire Elon Musk. Ukraine’s vice prime minister, Mykhailo Fedorov, tweeted a picture of the shipment, which seems to have been delivered by truck.

Less than three days ago, Fedorov had asked Musk for help to provide Starlink terminals as the country’s internet was severely disrupted when GigaTrans, Ukraine’s backbone internet provider, saw connectivity temporarily fall to below 20% of normal levels, as reported by NetBlocks. The SpaceX CEO quickly responded and said that terminals were being sent.

@elonmusk, while you try to colonize Mars — Russia try to occupy Ukraine! While your rockets successfully land from space — Russian rockets attack Ukrainian civil people! We ask you to provide Ukraine with Starlink stations and to address sane Russians to stand.

While the low-orbit internet satellite service can provide a relatively fast connection, Tim Farrar, a consultant in satellite communications, noted that using Starlink in Ukraine’s current situation would be challenging. The satellite dish requires a near-perfect line of sight to the sky, which could be difficult in an urban area such as Kyiv that is filled with high-rise buildings.

Moreover, it might be a safety hazard for those under siege, as pointed out by John Scott-Railton, a senior researcher at the University of Toronto’s Citizen Lab project. He said that there is a possibility that users’ uplink transmissions could be used as a beacon, making it easier for Russian forces to locate targets.

This isn’t the first time that Starlink terminals have been donated, as SpaceX recently made a similar initiative in Tonga after it had lost its internet following volcano eruptions.