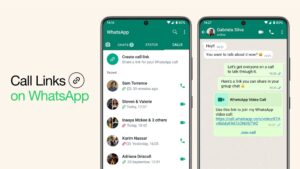 Participants of a WhatsApp call are usually limited to those who are there at the start of the process. This is changing, as the messaging app starts rolling out what it calls Call Links this week. The idea is so that you can generate and send out links to a call, and anyone with the link can join the call that is already ongoing.

The announcement came from a Facebook post by Meta CEO Mark Zuckerberg, which is pretty light on details. Though in an email to the press, the company says that Call Links can be generated from the Calls Tab, for both audio and video calls. Naturally, you’ll need the latest version of WhatsApp installed on your phone to use this.

Call Links sounds like a pretty convenient feature, especially if you have frequently scheduled calls with friends and family, and there’s one or more members who are consistently tardy. Though there’s one niche limitation to the implementation of the feature, which is the fact that, you can’t schedule calls ahead of time using the links. This is a feature that’s available to users of Apple’s FaceTime, but in a statement to Engadget, a spokesperson has confirmed that you can’t do the same on WhatsApp with Call Links.

But going back to the Mark Zuckerberg Facebook post, he also says that the company is currently testing encrypted video calls for up to 32 people. No further details were provided for this feature, with the post concluding simply with “more coming soon”.

Currently, the implementation is a little on the confusing side of things. The FAQ page reads that you can have group video calls of up to 32 people, but only eight participants can be active on a video call at a time. It’s unclear what exactly will change when whatever the company is testing rolls out to the general user base.