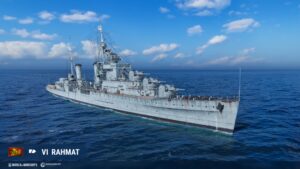 If you’re a fan of ships, you’re probably already playing World of Warships. The game is getting its Pan-Asian Cruisers event as the first event of the year. And as part of that, alongside several others, the game is adding a ship that’s inspired by the Malaysian ship Ex KD Rahmat.

The Ex KD (Kapal Diraja) Rahmat has had quite the history behind it. Commissioned all the way back in 1971, it was ordered from Yarrow Shipbuilders as the Hang Jebat. It was initially configured as an anti-submarine warfare frigate. Then in 2000, as part of a routine refit it was turned into the second training platform for the Royal Malaysian Navy.

It was then decommissioned in 2004, and turned into a museum ship in Lumut in 2011. Its life as a museum ship lasted until 2018, during which it suffered two leaks – one in 2017 and another in 2018. At this time, the ship was deemed irrecoverable and scrapped.

Worth noting that the real life Ex KD Rahmat was a frigate. Its incarnation in World of Warships, on the other hand, has been adapted as a Dido-class cruiser. It has also been placed in Tier 6, with the bigger numbers generally translating to better ships. You can find out more about the update, as well as the other ships added as part of it, by hitting the link below.