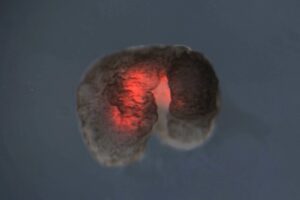 When we hear the word “robot”, images of mechanical things made to look somewhat like an existing living thing comes to mind. The many robots of Boston Dynamics frequently come to mind, what with their ability to mimic not only the look, but also many feats of their organic counterparts. But scientists have made biological robots called Xenobots that do none of that. Instead, they do something more impressive – reproduce.

But to kick things off, let’s get one thing clear – these robots are very far removed from what the general public knows to be robots. These Xenobots measure in at less than1mm wide, and are made from stem cells of the African clawed frog, Xenopus Laevis, hence the name.

Being fully organic in nature, these Xenobots consist of about 3000 stem cells harvested from frog embryos, which were then left alone to incubate. They then take the form of these blobs, without any gene manipulation involved in the process. They also do things like moving and healing. The folks at the University of Vermont, Tufts University and Harvard University’s Wyss Institute for Biologically Inspired Engineering first observed these behaviours last year.

More recently, and with the help of AI, the researchers have sculpted the Xenobots into a vaguely C like shape, or Pac-Man like shape if you prefer. The Xenobots then make use of this new shape to gather stem cells in the cavity, and turn the bundle of stem cells into a new Xenobot.

Speaking with CNN, the study’s lead author Josh Bogard says that “it’s not so much what a robot is made from but what it does, which is act on its own on behalf of people”. And therefore, its new shape takes the place of conventional programming, as in it is made to replicate on its own.

This kind of tech sounds like something from the pages of biotech science fiction, and is naturally conjuring Jurassic Park and Terminator memes on the internet. The fact that the Xenobots research is funded by the US Defense Advanced Research projects Agency (DARPA) doesn’t exactly help assuage the usual robot overlord fears. But considering its current state of being locked in a controlled, stem cell-rich environment, practical use, let alone actual weaponisation, is still a long way away.

On a more optimistic note, the researchers mention a lot of the practical uses. These include the likes of collecting microplastics from the oceans and regenerative medicine.