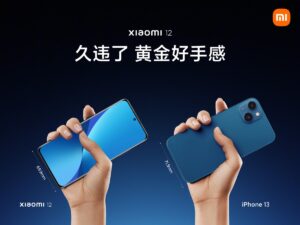 Xiaomi announced that it will be launching its new Xiaomi 12 smartphones on 28 December 2022 earlier this week. Expectedly, the company has recently begun releasing a set of teasers on Chinese social media platform Weibo, vaguely revealing what to expect from its latest flagship series.

One of which features a size comparison between what appears to be the standard Xiaomi 12, together with an iPhone 13. In this particular teaser image, the company claims that its new flagship will be more comfortable to hold single-handedly as opposed to Apple’s smartphone due to its smaller width of just 69.9mm. This also officially confirms its new tall form factor and aspect ratio, a detail that was revealed via a set of live photos leaked back in October. Xiaomi added that the smartphone will sport a 6.28-inch display.

The company also teased that the Xiaomi 12 series will be touting plenty of camera improvements. Among these include faster image processing via new camera algorithms, especially for night mode photography. Xiaomi claims that it had spent two years of research and development for this latest improvement.

Besides that, it revealed that the upcoming flagships will feature a better internal cooling system. Despite its new form factor, the company says that its engineers have managed to fit in an adequately sized Vapour Chamber cooling system in the phone to keep the temperatures of its components in check.

Currently, these are the only few key details regarding the upcoming flagship series that has been released. Seeing that the Xiaomi 12 will be officially launched next week, it is very likely that the company will reveal more details along the way.