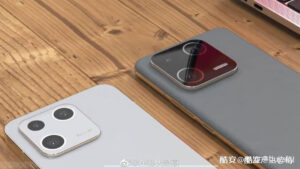 Live photos allegedly featuring the upcoming Xiaomi 13 and 13 Pro have surfaced online, thanks to a leakster who shared them on Chinese social media website Weibo. If they are what they claimed to be, it appears that the prior leak by Steve Hemmerstoffer (aka OnLeaks) have been mostly accurate, save for some inaccuracies in terms of lens sizes and other finer details.

Much like the aforementioned 3D renders, the alleged live representation of the standard Xiaomi 13 is shown to sport flat frames and rear panel (in white), along with a square-shaped rear island which comprises a triple camera setup. Also visible is a flat display with a top-centred camera cutout, speaker grille and a USB-C port at the bottom, as well as a volume rocker and lock/power button on the right-hand side.

Meanwhile, the Xiaomi 13 Pro is shown to feature a larger display with a top-centred camera cutout, and a leather-like rear panel in grey – both of which are curved. Like its sibling, visible at the bottom of the phone is a speaker grille and a USB-C port, as well as a volume rocker and lock/power button on the right-hand side. On the back of the phone is a slightly thicker square-shaped island, along with a similar camera layout as its smaller sibling.

Specifications of either Xiaomi 13 variants are not known at this time. However, leakster Yogesh Brar claims that the Pro model could come with a Snapdragon 8 Gen 2, up to 12 GB of RAM, a 4,800 mAh battery with 120 W fast charging, and a triple 50 MP camera setup which includes Sony’s 1-inch Sony IMX 989 sensor for its primary shooter. The imaging system is also said to be powered by the brand’s new Surge C2 chip, along with enhancements developed by Leica.

On the official side of things, Xiaomi recently has revealed via its Weibo account that the Xiaomi 13 flagship series is slated to launch this Thursday in China, on 1 December 2022. Along with the announcement, the company also confirmed that the standard variant will feature a flat OLED screen and IP68 rating in terms of water resistance. More teasers regarding the series’ key specifications are expected to be released as the date of the event draws close.

The post Xiaomi 13 And 13 Pro Appear In Live Photos Ahead Of Launch appeared first on Lowyat.NET.