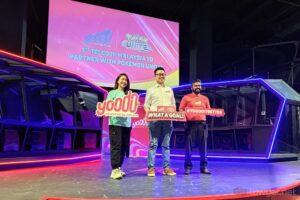 As a telco, Yoodo is no stranger to the esports scene locally. Now, the telco has announced another esports endeavour, adding Pokémon Unite to the list. In conjunction, the telco has also announced a tourney called the Pokemon UNITE Malaysia Open 2022.

Details about the tourney are scarce at the moment, but Yoodo has announced that the tourney will have a prize pool of US$20000 (~RM84000). Registrations will open on 27 July, and will stay open until 30 August, with the event itself happening on 10 September. That being said, a company representative says that the sign-up page itself is not live yet, at the time of writing.

In conjunction with the tourney, Yoodo has announced that it will be launching data add-ons for Pokémon Unite. Details for these are also scarce, and the telco says that more details on this will be announced in August. That being said, considering the other add-ons that are already available, it will likely be up to 20GB of data dedicated to the game, and said data will be available at more affordable rates.

As for why Yoodo went with Pokemon Unite than the more conventional games like the current Sword and Shield, or even Pokemon Go, for that matter, the key here is the fact that Unite is a MOBA. The genre remains ever popular, and telco head Chow Tuck Mun says that the company wants esports titles that not only emphasises personal skill, but teamwork as well.

The announcement coincides with the first anniversary of Pokémon Unite. As a celebration of sorts, the game is adding up to six new playable characters, three of which has been revealed to be Glaceon, Buzzwole and Tyranitar. There’s also a new Boss Rush mode as well as a new battle pass, among other things.

All that being said, we can probably expect Yoodo to make another announcement in August. This next one will hopefully have more details on what its data add-on will be like, as well as the structure of its Pokemon Unite tourney.