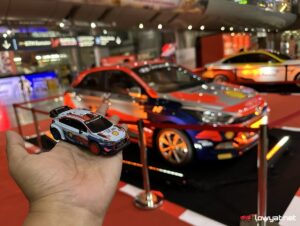 Shell Malaysia will be having two roadshows to showcase the newly released Shell Motorsport Remote Control Collection, as per what we noted in our report earlier this month. However, we didn’t know at that time you can actually get your hands on all seven models within the collection directly at the roadshow.

In case you missed the news, the Shell Motorsport Remote Control Collection consists of seven different racing car models which can be controlled via Bluetooth by using the Shell Racing mobile app. Six out of these cars including the BMW M4 Motorsport, Nissan Formula E Gen 2, Hyundai i20 Coupe WRC, Shell V-Power Racing Team Ford Mustang GT, Team Penske Indycar, and Team Penske Ford Mustang GT are priced at RM30 each although you have to fill up at least RM50 worth of fuel before you can purchase.

In order to enable the Bluetooth remote capability on these cars, you also have to purchase the Bluetooth Smart Battery module which costs RM30 per unit. However, the module is included together with the Ferrari SF90 F1 model that was provided for free with selected Shell Helix lubricants that we mentioned earlier.

Now that you are up to speed, you might be wondering how Shell circumvents the fuel purchase requirement at the Shell Motorsport Remote Control Collection roadshow locations. Well, say hello to the RM50 Shell fuel voucher.

Let’s say you decided to purchase this week’s model – Nissan Formula E Gen 2 – at the roadshow. Go to the counter, inform the staff of the model that you would like to purchase, pay RM80, and you will then be provided with the RM50 Shell fuel voucher alongside your chosen model.

If you want to get your hands on the Ferrari SF90 instead, you will receive the Shell Helix engine oil of your choice on the spot alongside the F1 model and Bluetooth Smart Battery module. In case you are wondering how much is the minimum cost to get all seven cars at the roadshow, here is the calculation with the Shell Helix Fuelsave engine oil as the lubricant choice to get the Ferrari SF90:

The only thing from the collection that you will not be able to obtain from the roadshow is the Limited Edition Collector’s Case even though it was on display there. The specially made case comes with a pre-cut foam that is designed to protect all seven models and have enough space for two battery modules together with their charging cable.

It can be purchased for RM80 at Shell stations but you need to pump a minimum of RM80 worth of Shell V-Power Racing fuel first before you can obtain it. Hence, if you plan to get the case, then the minimum total ownership cost for the whole collection would then increase to RM860.

Aside from allowing the public to get their hands on the full Shell Motorsport Remote Control Collection without waiting for each model to be available at Shell stations on weekly basis, the roadshow also allows visitors to experience the vehicles themselves via two sets of mini circuits. You can also check out two vehicles draped in replica liveries of the BMW M4 Motorsport and Hyundai i20 Coupe WRC which was expertly applied by the local wrap powerhouse, Motorsport Playground.

Before we forgot, we were informed by the staff at the roadshow that there is a limited number of stocks for each vehicle every day and they are being made available on a first come, first served basis. In fact, when we visited it at around 3:15 PM today, the Hyundai i20 Coupe WRC as well as Bluetooth Smart Battery is already out of stock for the day.

Open to visitors from 10:00 AM onwards, the Shell Motorsport Remote Control Collection roadshow is currently taking place at the Level 2 Concourse of KL Sentral until this coming Sunday, 23 October. After that, the roadshow will then move on to the South Court of Mid Valley Megamall KL for its second leg of the tour which will be happening from 26 to 30 October.

The post You Can Now Buy All Seven Shell Motorsport Remote Control Cars At Their Roadshows appeared first on Lowyat.NET.