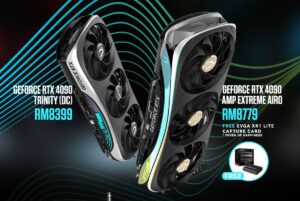 Zotac officially unveiled the SRP of its GeForce RTX 4090 Amp Extreme AIRO graphics card. Starting today, the card will retail for RM8779, and will be available at all authorised resellers and PC stores.

As one of the latest members of the NVIDIA GeForce RTX 4090 family, the AIRO essentially mimics the hardware and internals as NVIDIA’s Founders Edition (FE) version of the card, save for the obvious difference in cooler shroud design and cooling technology. Specifically, the card is equipped with a handful of Zotac-centric features, including its IceStorm 3.0 Advanced Cooling technology, which in turn is paired with its own Zero RPM technology called FREEZE Fan Stop.

Other features of the AIRO include SPECTRA 2.0 RGB diffused RGB LED strip lined around the GPU’s edges, an AIR Optimised Design that makes full use of the triple-fan cooling solution attached to the massive heatsink that is sitting on the GPU.

On the subject of heatsinks and cooler design, the back of the AIRO is also reinforced with a backplate that, as we all know, adds rigidity to the RTX 4090, as well as minimises the possibility of PCB sagging. To that end, the card also ships out with a GPU support bracket.

Specs-wise, the RTX 4090 AIRO houses the Ada Lovelace architecture, made from the 4nm TSMC process node, has 24GB GDDR6X graphics memory running at 21Gbps, houses 3rd generation ray-tracing (RT) cores and 4th generation Tensor Cores. And 16384 CUDA cores, as well as a 384-bit memory bus. In terms of speed, the card’s boost clock is slightly faster than the FE version at 2580MHz.

For output, the AIRO has three DisplayPort 1.4 ports and one HDMI 2.1 port. Oh, and the card is powered by a new 16-pin 12VHPWR PCIe power port.

As mentioned at the start, the Zotac GeForce RTX 4090 AMP Extreme AIRO is already available for purchase and to sweeten the deal, the brand’s local distributor, Sun Cycle, will be bundling each card with a free EVGA XR1 Lite Capture Card, while stocks last. On a side note, the company also announced that the AMP Extreme Trinity version of the RTX 4090 would also be going on sale at the same time, and retails at an SRP of RM8399.