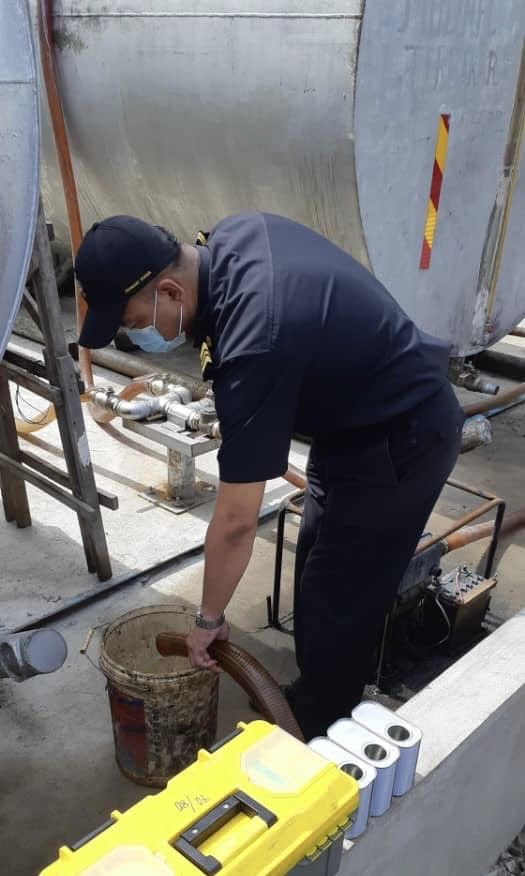 KOTA KINABALU: Enforcement authorities have seized some 29,000 litres of subsidised diesel in an operation in Tuaran, some 35km from here.

Personnel from the Domestic Trade and Cost of Living Ministry Tuaran office also detained two local men at an unnumbered storage facility in Kampung Lok Batik at 10.30am on Thursday (Jan 12).

District enforcement chief Saripuddin Moleng said they raided the facility after staking out the site for a week.

He said the diesel was stored in several skid tanks, adding they also seized an electronic pump believed to have been used to misappropriate the controlled fuel.

“The diesel together with the other seized items were valued at RM107,000,” he said in a statement here on Friday (Jan 13).

“The two suspects, who we believe were working there, told us the diesel was obtained through legitimate industry diesel suppliers,” he added. Saripuddin said the men, however, could not produce the necessary paperwork to allow them to store the diesel at the location.

He said the case was being investigated under Section 21 of the Control of Supplies Act 1961 for having controlled goods and intending to commit an offence with the items as well as not having a valid licence.

The case, he added, would also be probed under Section 20(1) of the same Act for storing the goods at a location with the proper approval by the authorities.

He explained that under the Control of Supplies Act 1961 (Act 122), anyone found guilty would be liable to a maximum RM1mil fine while any subsequent offence could lead to further fines of up to RM3mil for, or three years’ imprisonment, or both.

As for companies, Saripuddin said, those proven to have run foul of the law could be subjected to a maximum fine of RM2mil as well as a maximum RM5mil for any subsequent offence.

He warned that the ministry would also not hesitate to suspend the licences of fuel stations that were suspected of being involved in misappropriation until the probe was completed.

“The ministry will continue to monitor the situation closely as well as carry out regular inspections to prevent the misappropriation of subsidised fuel in Tuaran,” he said.