GEORGE TOWN: Newly-elected Tanjong MP Lim Hui Ying will get to work immediately to fulfill her promises after she was given a thumping mandate by voters in the constituency.

“I will soon be meeting up with the relevant departments so that I can work with them on the early preparation for the country to face an ageing population, cementing the George Town inner city as a Unesco World Heritage Site, and gender equality with a focus on citizenship of children born to Malaysian mothers. 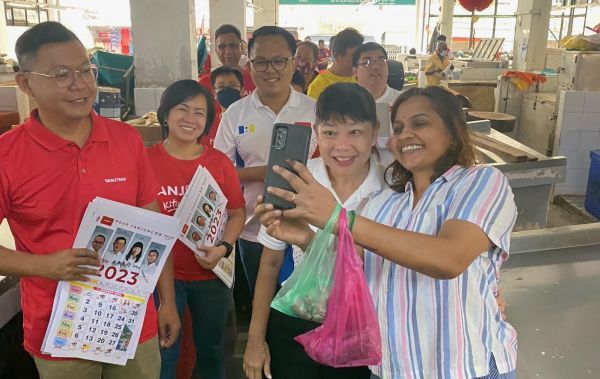 Tanjong MP Lim Hui Ying having a selfie taken with a voter at the Chowrasta Market.

“All these were stated in my manifesto but I need to go meet my voters over the next few days to thank my voters for giving me the mandate to serve them,” she said when met at the Chowrasta Market in Penang Road on Sunday (Nov 20).

Lim together with assemblymen Teh Lai Heng (Komtar), Daniel Gooi (Pengkalan Kota) and Heng Lee Lee (Berapit) as well as Penang Island City Council (MBPP) councillors Wong Yuee Harng and Nicholas Theng and campaign workers handed out 2023 calendars to those in the market.

First-timer Lim, who is also Penang DAP secretary, won with a 28,754 or 72.23% majority against Barisan Nasional’s Tan Kim Nee and Perikatan Nasional’s H’ng Khoon Leng who received 3,214 and 2,501 votes respectively. There were also 386 spoilt votes.