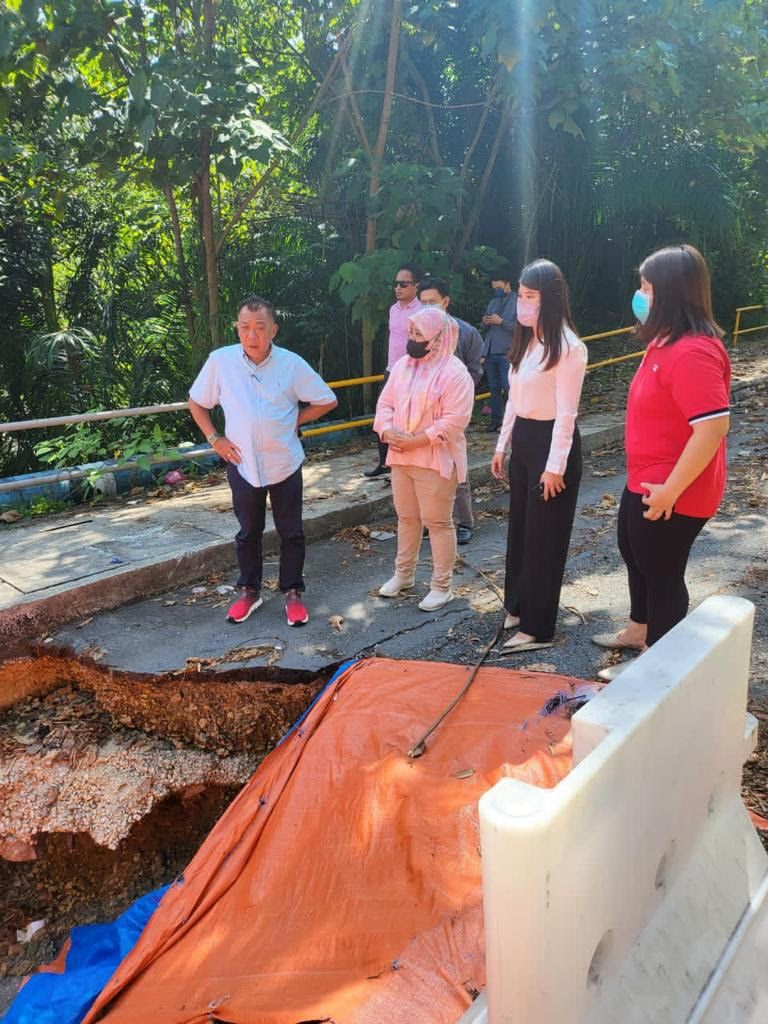 Datuk Seri Bung Moktar Radin (left) with Sandakan MP Vivian Wong (second right) at the landslip section at KM2.1 in Sandakan, which is leading to the city centre.

KOTA KINABALU: RM1.3mil has been approved by the government to fix a road damaged by a landslip at KM2.1 near the Sandakan city centre.

A section of the road there recently collapsed due to unfavourable weather conditions.

“This needs to be fixed soon as it is one of the main roads leading to the city centre, besides being in the vicinity of a school, which also raises safety issues,” he said.

Bung Moktar, who is state Works Minister, said this after visiting several damaged roads, bridges and lamp poles in Sandakan on Tuesday (June 14).

On another section of the road that had been hit by a landslip near Taman Vun Wu, he said the Sandakan district engineer has been directed to make a proposal of the cost estimate for repairs.

“It is the same for the collapsed bridge (Jambatan 10) at Kampung Sim-Sim. I have asked the Sandakan Municipal Council (SMC) to study and provide a cost estimate to build a new bridge.

“Once we have the proposals, we can forward the application to get allocations from the federal or state governments,” he added.

On complaints by the public and motorists of faulty lamp posts in several areas around the city, Bung Moktar also urged the state Local Government and Housing Ministry and SMC to send up proposal to replace damaged lamp posts.

“Maybe it is a good idea if we change the existing ones with LED or solar-powered lighting, so they are more sustainable and durable,” he added.

Also present when he was making his rounds were Sandakan MP Vivian Wong and SMC president Benedict Asmat.