Back in 2016 Jho Low was fire-selling paintings to raise multi-million dollar loans at a time most banks would not touch him as a client. Sarawak Report wrote about the calls to regulate that flow (below).

Six years later it seems little has changed and the top auction houses are still advertising their services for providing access to quick money without the normal scrutiny of the financial service industries. This and other money-laundering topics will be under discussion tomorrow during this ACAMS debate.

[April 2016] Quintessentially British, yesterworld and exceedingly posh – that is how the top UK based auctioneers position their image and it has worked very well in propelling a once down-market trade, flogging second hand goods, into a gilt edged profession, dealing in billions.

But, in the process, it appears, some of these top global players have ventured into the very different trade of lending money – for example, Sotheby’s Financial Services, which has emerged as a key lender to Malaysian financier Jho Low.

We therefore ask whether, by mixing the two, such institutions are also being utilised in a third capacity – that of an up-market laundering service? 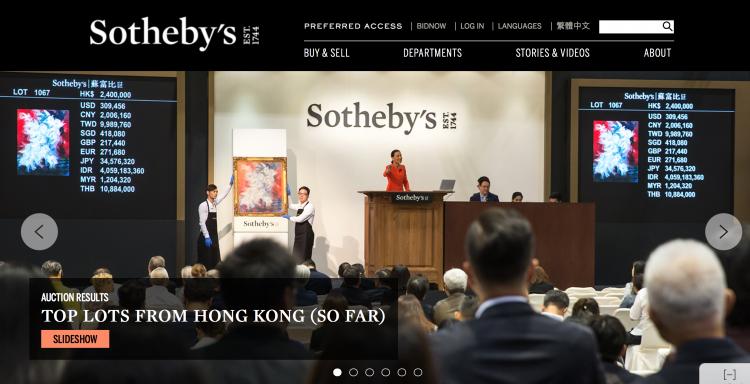 As with so many other leading institutions, ranging from the UN Foundation to top global banks, the 1MDB spotlight has shone unwelcome light into some discreetly shaded places of the art world, in pursuit of the antics of Jho Taek Low, who has been buying and then selling paintings like billy-o, ever since he parted 1MDB from over a billion dollars of its development money.

He has also, according to Bloomberg, been raising loans from none other than Sotheby’s  to the tune of hundreds of millions of dollars, using some of those paintings as collateral.

Our research shows that Sotheby’s does indeed boast this service, which it claims is unique.  The firm details how it has provided no less than US$4 billion in loans to its valued customers to date and recommends its loan service for being unrivalled in the speed with which they can provide the money – and for it’s utmost confidentiality, of course:

“Unmatched speed” of our loans and, of course, totally confidential

Sotheby’s are not shy in putting forward the advantages of their money services over and above other more conventional institutions.  In particular, they recommend the “unmatched speed” of their loans and total discretion.

So, what are the standards of due diligence, compared to banks, in ascertaining the origin of these secret cash investments and how closely are these being regulated?

Of course, once a painting has been bought and sold, any bank would be happy to open an account with a cheque from a reputable auction house from the proceeds of a sale of some over-price piece of modern art….. so, surely, the standard of financial regulation in the art world MUST have to be every bit as stringent as that of banks?

But, in which case, how come Sotheby’s are beating the competitive money-markets when it comes to the speed of providing money?  Sotheby’s explain it as follows:

“..because of Sotheby’s global reach and deep knowledge of the art market, Jan’s [Prasens] group can streamline the diligence process and get deals done with remarkable efficiency.” [Sotheby’s Financial Services, testimonials]

Ah! So, deep knowledge of the art market enables “remarkable efficiency” and “unmatched speed” in the diligence process surrounding these big loans – does this include financial due diligence into their customers or just the provenance of the artwork?

Apparently not, as Southeby’s Financial Services promote their loans on the very basis there is no need to examine the background to the cash – how conveniently ‘rapid’:

SFS can quickly and accurately value your collection, using it as collateral to provide individualized financing ranging from $2 million to $150 million.  And because all SFS loans are underwritten by art and not personal wealth, no financial information or covenants are required, and closings are usually completed in less than 30 days. [Sotheby’s Financial Services]

We are not, of course, the  first to ask such questions about the art market in general with respect to big buyers of dubious origin like Low. Below is how some experts have answered them, for example Professor Roubini of the Stern School, New York, last year in Davos, where the role of the art market as a money-laundering device was discussed as a pressing global problem:

“Whether we like it or not, art is used for tax avoidance and evasion,” said Prof Roubini, himself an art collector. “It can be used for money laundering. You can buy something for half a million, not show a passport, and ship it. Plenty of people are using it for laundering.” [Financial Times]

So none of the regulations governing banks apply to Sotheby’s Financial Services?

Detailing Jho Low’s activities, Bloomberg has explained one way it can be done. A buyer, it appears, can produce his artwork as a collateral for a loan, on the understanding there will be a sale if the loan is not repaid.

Any expensive item can be used as collateral, valued at its lowest likely sale price say Sotheby’s [Sotheby’s Q&A section)

Such a deal would provide very clean and private cash for that secret borrower, it would appear – and according to Bloomberg this is what Jho Low was up to in February:

“Now Low is once again creating buzz in the art world. Since Feb. 3, he has sold works by Claude Monet, Pablo Picasso and Jean-Michel Basquiat, according to three people familiar with the matter. They fetched about $54 million, with unusually steep losses on at least two pieces.

The artworks consigned by Low were among the top lots at Sotheby’s evening auction of Impressionist, modern and contemporary art in London this month. All three had been pledged as part of the collateral for a loan of about $100 million from Sotheby’s Financial Services, two of the people said, asking not to be named because the information is private”

We contacted Sotheby’s to ask what checks would be done and by whom on the origin of money used to buy paintings, such as in the case of Low?

And we will publish their answers once they arrive [six years later we have received no reply].