GPS is a party dominated by Muslims in a Christian state. For decades this cabal of powerful families have abused the levers of power to drain the rich resources of Sarawak and indeed Malaysia into their own pockets, so they will do almost anything to keep control at election time.

Barge of beer headed for distribution to voters

However, amongst the litany of sins and abuses of the levers of state power, it is the use of alcohol that rates as particularly pernicious.

After all, no ‘Good Muslim’ touches alcohol and their religion teaches all the dangers that come with alcohol abuse.

Yet, here in Sarawak, the GPS party has been exposed time and again abusing state power and their looted cash to ship vast quantities of mind bending booze to the indigenous people whom they wish to trick into surrendering up their power again.

What kind of ‘Good Muslim’ is that?

GPS has been photographed in the past week, as in past elections, transporting not just van loads but BARGE loads of beer and booze into their target areas where drunken parties are being encouraged to last throughout the final week of the election to ensure that voters are too out of their minds to resist instructions or make a judgement. 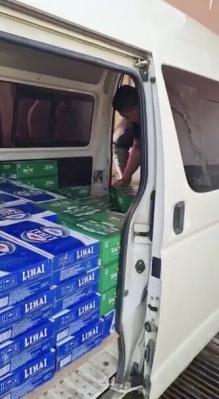 A GPS van loading up outside a GPS office in Sarawak

The state appointed and funded longhouse chiefs can do the rest.

Those who have conspired to thus beguile and trick their victims are no better than vile drug dealers who seek to suck the life blood from their clients. Yet, to be sure, each and every one of them will be bowing their heads in sanctimonious worship at the mosque and proclaiming their self-righteousness and religious purity to anyone who will listen.

Perhaps they do not believe a word of what they preach?  If they do then they will be aware what waits for them and the sins they have committed.

Back on this earth – Vote AGAINST any party that offers free alcohol to vulnerable village folk and young people.

The sickening videos circulating right now of the young men and women of Sarawak made drunk and disorderly under the GPS banners are available for all to see across the state.