Consequential constitutional monarchs know well that their dignity and longevity relies on remaining well above the common fray.

Yet, in Malaysia right now the dangers for royalty of slipping into the political arena are being spelt out, as an overtly well-meaning monarch who is trying to resolve a hung parliament (they happen) has become perilously in danger of owning whatever outcome is arrived at.  That outcome will inevitably be unpopular with a lot of people.

The point of the monarch and the nature of his role is that he should be seen to be impartial, on the side of the people and a referee, there to make sure the rules are followed. If he remains carefully above the fray he avoids responsibility when politics go wrong and keeps the confidence of the people.

The only way the King can achieve that objective is to allow the leader of the largest party voted for by the public to make the first bid to form a majority coalition. This is Anwar.

If Anwar were to fail (and that would become immediately apparent either through Anwar’s own admission or on the floor of Parliament) then the King should call the second likely contender, which is Muhyiddin (if Hadi is still letting him pretend to be running PN).

Given the figures, it is not hard to see how a working coalition could be formed through this fair process, as has been achieved in numerous such situations across the world. There is a clear path to government in Malaysia if the political leaders are allowed to go through the paces as determined by the weight of the popular vote and the number of seats (PH 82, PN 73, BN 30, GPS 23 …). 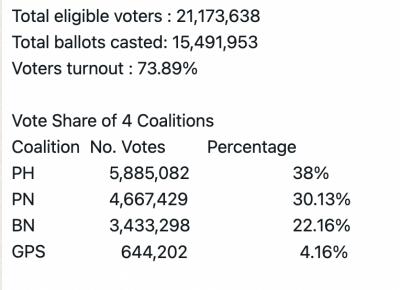 However, in his efforts the Agong has avoided the straightforward path and become involved. Moreover, he has seemed to act unevenly towards different political groups and there has been an unhealthy secrecy, which on such occasions ought to be avoided.

After all, it has been inevitable that there is a widespread perception in Malaysia that had those election figures been reversed, with PN standing as the largest party, Muhyiddin would have been invited to the palace in a flash.

Everyone knows by his past actions that the Agong favours Muhyiddin, unfortunately, and equally that the Agong seems averse to allowing Anwar to step into his popularly elected position.  Indeed, this is the third time the Agong seems to have got tangled in twists and turns seemingly in order to avoid Anwar being given the opportunity to form a government.

Hopefully this is mere perception, but it is a perception that should be put right. Nevertheless, rather than immediately inviting Anwar the Agong strangely announced he was first scanning certain SDs (statutory declarations) allegedly sent in secretly by certain MPs behind their parties’ and voters’ backs to make up his mind on who to appoint.

After the hours had ticked by another day the Agong then announced he would invite both Anwar and Muhyiddin at the same time this afternoon to have discussions with himself, thereby leaving all other parties out of the equation in whatever was going on.

It soon emerged that what was going on was that the Agong had a plan to make both these parties work together in a coalition that he had dreamed up himself and which gave no space to what the other parties might wish. In other countries this attempt to knock heads together, though doubtless well-meaning, would be instantly decried as political meddling by a head of state.

Worse, it rapidly it became clear the gambit hadn’t worked. Anwar emerged to acknowledge in a sparing statement that matters had yet to be resolved, to be followed by a flamboyant press conference on the part of Muhyiddin (standing with Hadi at his right shoulder) in which he said PN would never cooperate with PH, ever!

After all, PH contains non-Muslims. These were folk that Muhyiddin was perfectly willing to work with all his political life during his time as a member of BN and then PH, but now as the puppet leader of PN he does what Hadi tells him and Hadi hates Jews, Christians, Indians and Chinese.

Following this debacle the Agong has ploughed on. He has now announced he will see each and every BN MP for a little chat tomorrow. It appears this little chat will be ‘one-on-one’ as if the Agong were the party leader or a party whip, which makes for exceedingly bad optics, though doubtless unintended.

It is also an unequal treatment of the chosen representatives of the people because the Agong is making clear that he is only interested in seeing BN MPs in such a manner. It seems the rest of the MPs can take their chances when the actual deal is done! (Abang Jo can take the blame for Sarawak on this front having said he surrenders GPS to whatever the King decides – meaning his Christian majority state would be willing to support PAS policies if so required).

The first suspicion this latest tactic has engendered amongst that majority of the people who voted PH (many of whom have been crowding outside his palace chanting “Reformsi!”) is that the Agong is trying to persuade those BN MPs to agree to support his protege Muhyiddin, despite the fact that this role is the prerogative of each party leader who should then inform the King of where his followers sit.

As if to confirm that very suspicion BN’s own party leadership responded to this announcement of the King’s intention by issuing an equally trenchant and stunning statement this evening to say that BN MPs would “100% REFUSE to work with PN”.

Whether the party will work with anyone or have its crucial 30 MPs sulk in opposition the statement did not say. Anwar could form a government without BN, Muhyiddin could not.

So, if the interviews go ahead, the Agong is now in serious danger of ending up neck deep in the political swamp engaging in a full-scale row with BN’s leaders. What if he discovers or persuades some of the BN MPs to work with PN after all?  Think of the row that this would cause and how angry very many Malaysians would be with their King!

There is another problem, because were the Agong to split the BN vote in such a manner, the new anti-hopping legislation will be tested to the limit before Parliament even sits. Would the Agong advise BN MPs to desert their party (thereby defying the voters who staggered out in the rain to make their choice just days ago despite the law to prevent just that) and support PN as independents?

That seems a very damaging potential development in terms of the overall image of the monarchy as the impartial caretaker of the people who sits above the political fray.

Meanwhile, there are those MPs whom the Agong is not apparently bothering to canvass in such a way at all, including those of the 4th bloc, GPS Sarawak. However, the influence of the Agong seems to have pervaded there as well.

At first it seemed that GPS were ‘in the bag’, as the saying goes, with Abang Jo eagerly shooting out to give Muhyiddin a head start by saying he had agreed to a GPS/BN/PN coalition. Then it turned out that BN had not discussed this matter with him and rejected his suggestion.

His move therefore appears suspiciously like another attempt to shoe in ‘Moo’ before the biggest party leader, Anwar, could get a chance to form a separate coalition.  Muhyiddin has far fewer paths to a majority than Anwar, so was Abang Jo being unwisely prompted to set off  momentum to assist a weak start?

It seems so, and just as with BN the GPS gambit has rapidly unravelled. Not only has it been rebuffed, but in the wake of toxic PAS leaning pre-election rhetoric by Muhyiddin himself (attacking alleged Christian proselytisers and alleged colonising Jews) the suggestion that Sarawak should support a government dominated by the extremist party has been met with statewide revulsion.

GPS not so happy either with PN?

Most specifically, 13 of Abang Jo’s 23 MPs are from Dayak (Christian) or Chinese seats.

A growing feedback of deep unease has been reported, forcing the state leader to backtrack mighty fast.

In doing so did Abang Jo perhaps give the game away in revising his statement to say that all he had meant to say was that he will rely on the ‘wisdom of the Agong’ either way?

Matters are therefore looking far less simple that they did on the day of the election, despite the hung result. The Agong could have called the largest party and left the politicians to thrash the matter out.

However, by refusing to do so he now has a situation where the PN leader regards himself still equally in the running (or rather as the more favoured candidate) whilst at least half of both the other parties he depends on for support have made clear they don’t.

This didn’t stopped Muhyiddin claiming at the same press conference rejecting PH that he has the support of 113 MPs. Given MPs are no longer allowed to party hop and the commitment should come from the party leaderships not signed individual papers collected by Muhyiddin himself (who was found to have lied over the exact same claim in 2020) the claim ought to be dismissed as meaningless till tested on the floor of Parliament itself.

Yet the Agong has taken up the matter and will be interviewing those MPs over their SDs.

As a result, three days later Malaysia is in far more tangled mess than it was before with a prospect of another secret day for politicians at the palace that appears targeted at changing minds and perhaps thwarting the popular will.

The Agong deserves to be keep well out of this and to remain untarnished – he should leave the parties to slug it out on the floor of parliament not behind closed doors at the Astana with his name dragged in.

He just needs to give each of them their turn in order of their precedence in the popular vote.